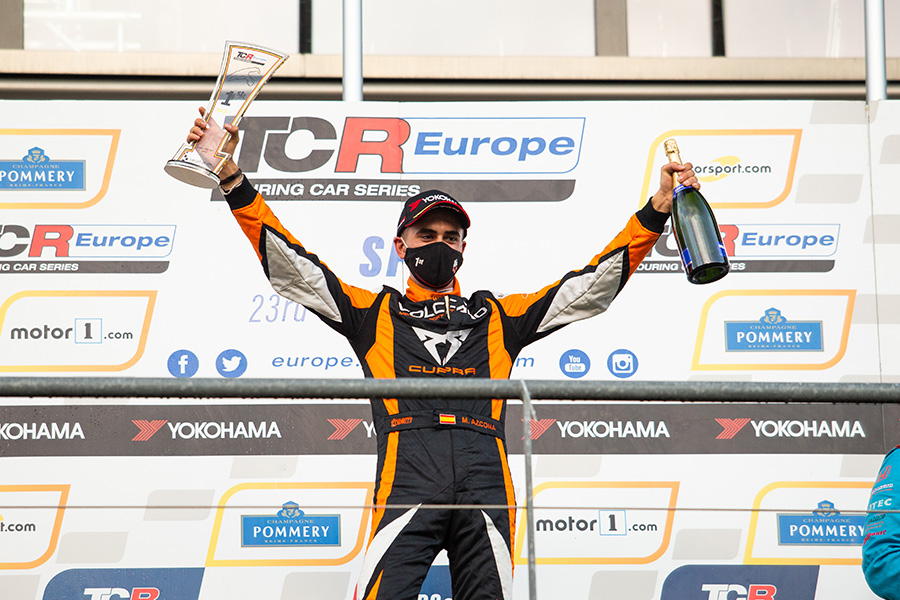 The 2018 TCR Europe champion and WTCR race winner Mikel Azcona will be the guest star of the TCR Italy’s season finale at Imola.
The Spaniard will drive one of the CUPRA Leon Competición cars run by the Scuderia del Girasole to support Salvatore Tavano in his attempt to retain the TCR Italy’s title.
Tavano, who aims for being crowned champion for the third consecutive year and giving the new CUPRA its first title, is currently second in the standings behind Eric Brigliadori.
The latter, in his rookie season at the wheel of a BF Motorsport Audi RS 3 LMS has claimed three race wins so far and proved one of the fastest drivers in the field.
With 53 points on offer at Imola, two other drivers - both at the wheel of Hyundai i30 N cars - have theoretical chances to fight for the title: Marco Pellegrini (Target Competition) and Felice Jelmini (MPA Motorsport), as they are currently placed third and fourth with gaps of 32 and 38 points from Brigliadori.
Other guest drivers in the event are TCR Europe regular and the leader of the TCR class in the Campeonato de España Resistencia Evgenii Leonov (Volcano Motorsport, CUPRA), the 2017 TCR Italy champion Nicola Baldan (Élite Motorsport, CUPRA Leon Competición), TCR Russia’s competitor Ibrahim Akhmadov (MM Motorsport, Honda Civic Type R) and Jonathan Giacon (MM Motorsport, Honda Civic Type R) who has won both races in the previous event at Monza.
The two races will be live in streaming at www.tcr-series.com, Saturday at 16:00 and Sunday at 12:40 local time (CET).