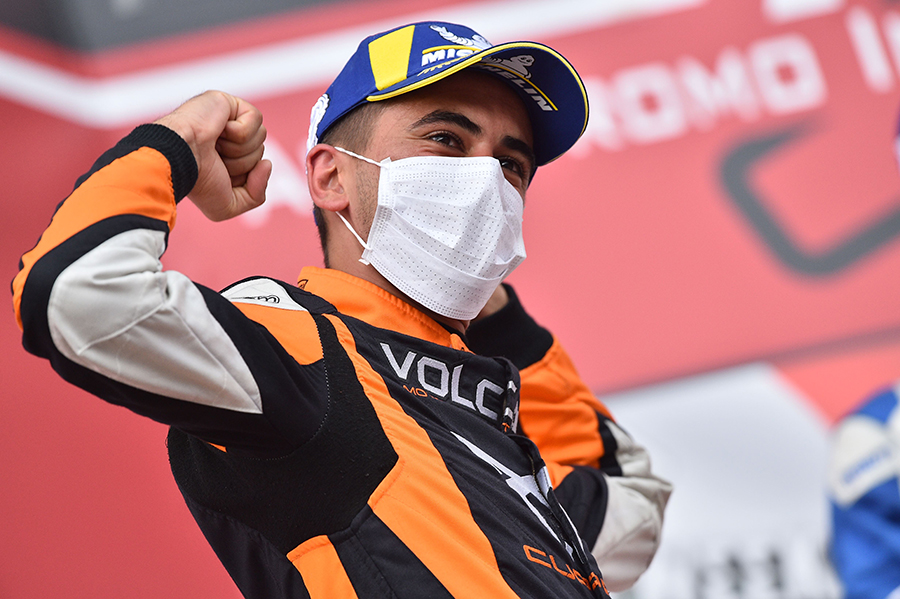 Mikel Azcona won an action-packed second race of TCR Italy at Imola from eighth on the grid, in a race which saw two of the title contenders retire and Antti Buri emerge as the new championship leader.
Buri started from pole position in his Target Competition Hyundai ahead of teammate Nicola Baldan, and the two drivers held station at the start ahead of Ruben Volt’s ALM Motorsport Honda.
Azcona was fast working his way up the order and was already up to fourth at the end of the first lap. The Spaniard then quickly picked off Volt for third at Tamburello on lap two, before passing Baldan for second at the same spot a lap later – with Baldan then running wide at Tosa, which handed Volt third position.
On lap four, Azcona assumed the lead from Buri, who didn’t defend too hard against the wild card driver at Tamburello.
New points leader Kevin Ceccon then began to make progress, passing the rival Hyundai of Igor Stefanovski on lap four for fifth place. Stefanovski was then passed a lap later at Rivazza by the BF Motorsport Audi of Eric Brigliadori, with Stefanovski running wide at the exit and into the gravel trap, before opting to drive straight into the pit lane.
Ceccon soon caught Baldan and the two battled over fourth, with Ceccon making his move past the 2017 champion on lap seven, but a lap later Ceccon’s race came to an end, slowing and heading back to the pits with damage at Acque Minerali, with Baldan’s car also sporting damage to its front-right corner.
Behind them, Brigliadori was struggling for pace and was passed by the Volcano Motorsport CUPRA of Evgenii Leonov on lap nine.
With Ceccon out, Brigliadori looked set to make up good ground in the championship, but a mistake at Rivazza at the end of lap 11 allowed Salvatore Tavano to get a run on him up the inside towards Tamburello.
At the same time, Ettore Carminati decided to try and go around the outside in his Hyundai, and there was inevitable contact, with cars going three-wide into Tamburello. Brigliadori crashed off into the barriers and Carminati was also out with a broken front-left upright after clipping the Audi.
The race was held behind the safety car for three laps as the two cars were recovered, before it was restarted for a two-lap sprint, with Azcona breaking away to take the win from Buri and Volt. Baldan lost another position to Leonov at the restart, while behind them Tavano was hit by Dušan Kouřil’s Hyundai and went wide at Tamburello; Kouřil moved into sixth and Tavano rejoined down in 11th. After the race, Kouřil was given a 10-second penalty for the incident that dropped him from sixth to 12th.
Buri’s second place elevated the Finn to the lead of the championship on 260 points, 19 clear of Ceccon, with Baldan now third, 31 points adrift.
The championship resumes again at Imola on September 3/5.