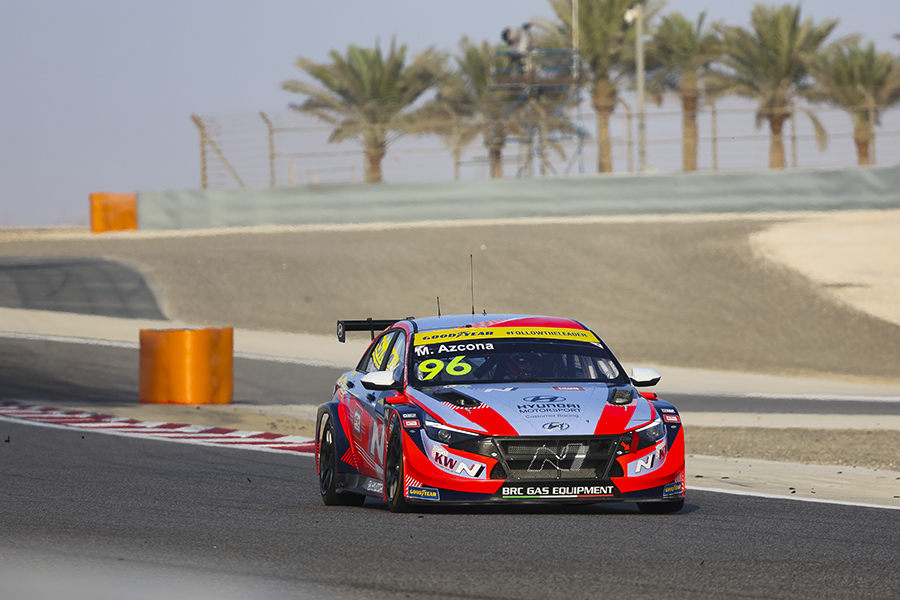 WTCR points leader Mikel Azcona made another step towards the championship crown by grabbing pole position for today’s Race 1 at Bahrain International Circuit. In the Qualifying, the Spaniard beat Nathanaël Berthon and Néstor Girolami increasing his leading margin in the standings to 39 points over the Argentine.

Just before the chequered flag dropped, Azcona jumped to the top with a lap of 2:11.428, while Nicky Catsburg was the last to qualify for Q2, kicking Tom Coronel off. The Dutchman was 13th, only 17 thousandths behind the twelfth-placed Dániel Nagy. The other two drivers eliminated were Tiago Monteiro and Viktor Davidovski.

In Q2, Azcona led the field from the beginning with a lap of 2:11.177 that was not to be beaten. Michelisz (2:11.450) was demoted from P2 to P3 by Berthon’s 2:11.299. Magnus joined after a long pit stop and moved up to fifth, but eventually Girolami (2:11.391) and Catsburg (2:11.504) advanced to third and fifth, joining Azcona, Berthon and Michelisz in the trip to Q3, while Attila Tassi remained off by only one thousandth of a second. Mehdi Bennani and Franco Girolami qualified 10th and 9th, and so will share the front row of the grid for Sunday’s Race 2.

Girolami was the first out in Q3 and set an impressive benchmark of 2:11.221; Catsburg (2:11.764) and Michelisz (2:11.422) were not able to beat the Argentine, though the Hungarian was faster in the first two sectors before losing nine tenths in the third. Eventually, Catsburg’s time was disallowed for track limit infringements. Berthon, then set a new provisional fastest lap of 2:11.175, but Azcona did even better with a 2:11.061 that gave him the pole position.