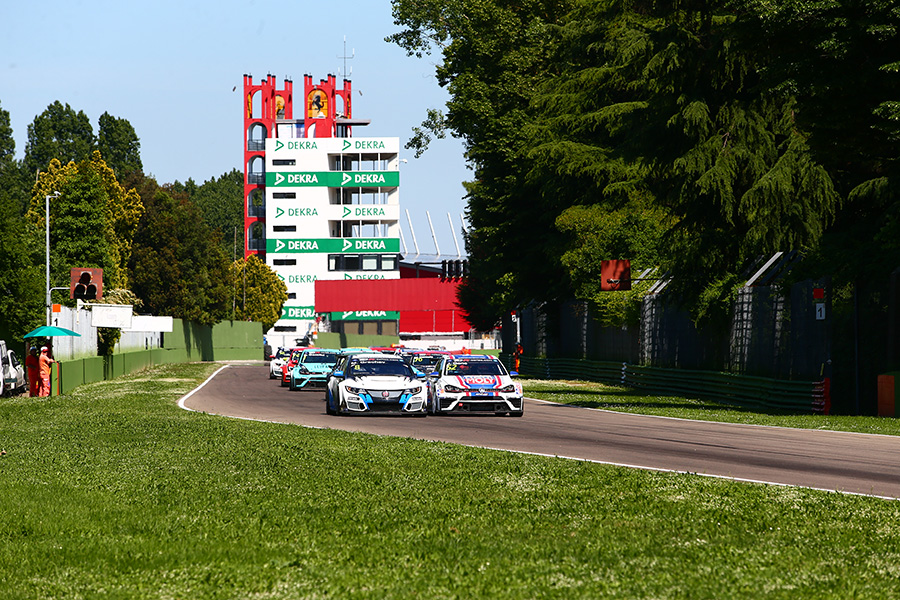 Motorsport can be funny sometimes. The very same car that had won Race 1 in Spa, was victorious in Race 2 at Imola, but with a different driver: Mikhail Grachev who has just joined WestCoast Racing in the place of Aku Pellinen.
The Russian had reasons to rejoice, as this move granted him that first TCR race win he was chasing since last year. And the icing on the cake for him was that he took the lead overtaking the very same car he had driven until the previous event.
Mat’o Homola finished second and climbed on the TCR podium for the first time, while Stefano Comini secured third place after an epic battle with Pepe Oriola.
With both, Gianni Morbidelli and James Nash sidelined by technical issues, Oriola and Comini are now first and second in the Drivers’ Championship, separated by only 14 points.

Key facts
Grid – Borković and Nash are missing, as their cars could not be repaired; Menu takes the start from the pit lane
Start – Gené darts from the pole, followed by Grachev, Tassi and Homola; Afanasyev retires with a broken drive-shaft
Lap 1 – Morbidelli recovers to 10th after starting from 13th
Lap 2 – Morbidelli slows down and retires with brake problems
Lap 3 – Tassi tries to defend the third position, but is passed by Homola and Pepe Oriola
Lap 4 – Grachev steals the lead from Gené
Lap 5 – Comini and Vernay run abreast fighting for sixth; Homola and P. Oriola overtake Gené moving up to second and third
Lap 6 – Gené drops further down behind Tassi and Comini
Lap 7 – Gené and Vernay overtake Tassi who drops to 7th; Vernay passes Gené for 5th
Lap 8 – Kajaia skids wide over the gravel at Villeneuve, but rejoins
Lap 9 – the leading quartet – Grachev, Homola, P. Oriola, Comini – is covered by 1.5 seconds
Lap 10 – Grachev creates a gap; Homola is chased by P. Oriola and Comini
Lap 11 – Comini overtakes P. Oriola for third at Rivazza 2; Kajaia passes Jordi Oriola for eighth
Lap 12 – P. Oriola loses also the fourth place to Vernay
Lap 13 – Grachev takes the chequered flag ahead of Homola, Comini, Vernay and P. Oriola