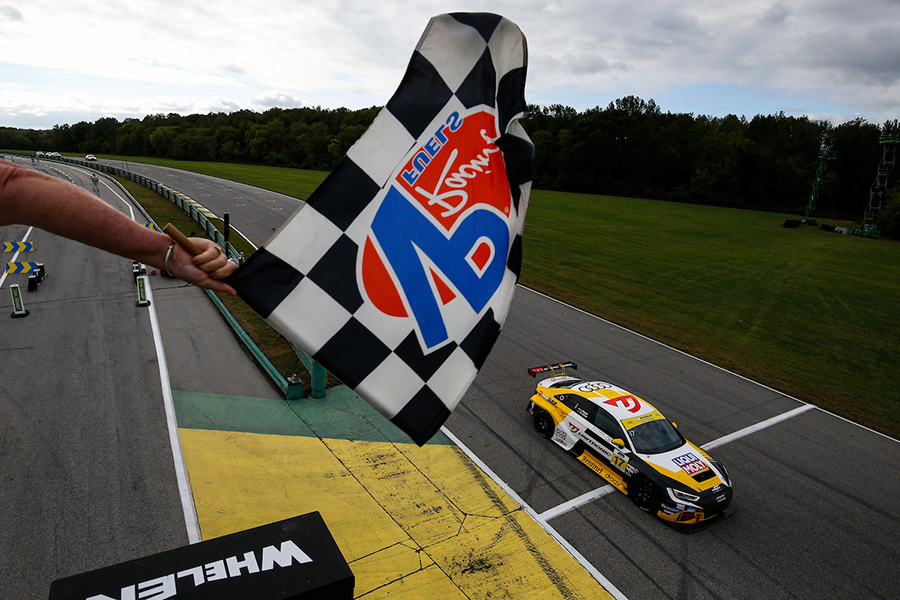 Mikey Taylor and Chris Miller at the wheel of their Audi RS 3 LMS won the TCR class in the ninth round of the IMSA Michelin Pilot Challenge at VIRginia International Raceway. This was the second victory for the JDC-Miller MotorSports, pair after that in the season opener at Daytona; actually, Taylor and Miller are the only team that have been able to win more than once in this year’s series.
At the end of the two-hour race, Taylor drove the Audi to take the chequered flag with a margin of 2.467 seconds over Stephen Simpson and Michael Johnson in the Michael Johnson Racing Hyundai Veloster N TCR.

“Once I climbed in, I just had to pass two guys,” Taylor said. “It was pretty straightforward. Then we had the pace to try to control it. The biggest thing was the GS traffic and trying to leapfrog those guys at the rear of the GS field who were at a similar pace to us.”

Behind the winners, there was a thrilling battle for the podium positions that ended with Simpson and Johnson winning a four-way final sprint to take the second place. They beat the Bryan Herta Autosport Hyundai Elantra N co-driven by Mark Wilkins and Harry Gottsacker by five tenths, while Tyler Maxson and Tyler Gonzalez were classified fourth in their Copeland Motorsports Hyundai Veloster N, one further tenth adrift.
The BHA Veloster finished fifth, four tenths behind the Copeland Motorsports car, and so Taylor Hagler and Michael Lewis retained the leadership in the standings, with a margin of 230 points over their teammate Parker Chase, while Gottsaker-Wilkins lie third, 30 points behind Chase.
The title fight is going to be a family affair between these three Bryan Herta Autosport cars, with 350 points at stake in the final round at Road Atlanta on November 12.