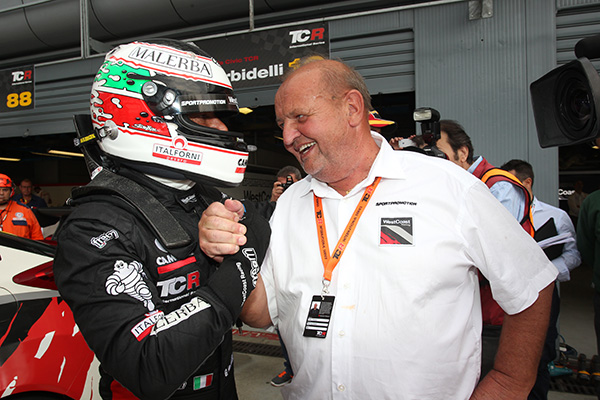 Under a cloudy sky and a threat of rain, Gianni Morbidelli drove his WestCoast Racing Honda Civic to lap the Monza circuit in 2:00.737, which gave him the second pole position after Shanghai.
The Italian driver was virtually uncatchable for the other competitors who had to settle for the positions immediately behind him. Eventually Stefano Comini and Pepe Oriola – currently first and second in the points ahead of Morbidelli – managed to qualify second and third.
Fernando Monje and Campos Racing kept on with the aim of improving the performance of the Opel Astra OPC; their work paid off as Monje was able to consistently close the gap and fight for third position on the grid. His final sixth place was a promising result in view of the next races.
Tom Boardman was set to drive the Ford Focus at a decent pace when he had to stop on the track because a number of indicators were signaling possible technical failures. Eventually his worries proved to be unfounded and he was able to drive back to the pits.
Another disappointed driver was Morbidelli’s teammate, Kevin Gleason, who crashed with a puncture on his first qualifying lap and spoiled his chances to provide the icing on the cake for WestCoast Racing.
Sunday’s races will go green at 12.35 and 14.05 local time, with a distance of 11 laps each.

Qualifying 1: Gleason misses the cut after crash
Gianni Morbidelli posted the fastest lap on his first attempt; his time of 2:01.737 was not to be beaten, although Stefano Comini posted a second fastest lap of 2:01.782 that was slower only by 0.045 seconds.
Comini’s teammates Andrea Belicchi (2:01.884) and Michel Nykjær (2:02.038) were classified in third and fourth, while Fermando Monje and his Opel Astra (2:02.069) confirmed the brilliant fifth position achieved in the second Free Practice.
A disappointed Kevin Gleason missed the cut after crashing out on his first flying lap. Tom Boardman was consistently improving at the wheel of his Ford Focus, but his car stopped on the track with a technical issue.
The following drivers advanced to Q2: Morbidelli, Comini, Belicchi, Nykjær, Monje, Gené, Oriola, Grachev, Skuz, Afanasyev, Veglia and D’Amico.

Qualifying 2: Morbidelli crushes his competitors
It only took one lap to Gianni Morbidelli for claiming pole position with an outstanding lap of 2:00.353 as none of his competitors was able to go under the 2:01 mark.
Target Competition and Bamboo-Craft Lukoil trios of drivers engaged themselves in a game to the last slipstreaming while trying to fill the positions behind the poleman. Eventually Stefano Comini secured second place (2:01.080) and Pepe Oriola moved up to third on a last gasp attempt (2:01.121) demoting his own teammate Sergey Afanasyev to fourth (2:01.382).
Andrea Belicchi raked fifth (2:01.762) ahead of a brilliant Fernando Monje (2:01.785).
Mikhail Grachev finished tenth (2:02.338), winning pole position for Sunday’s second race.