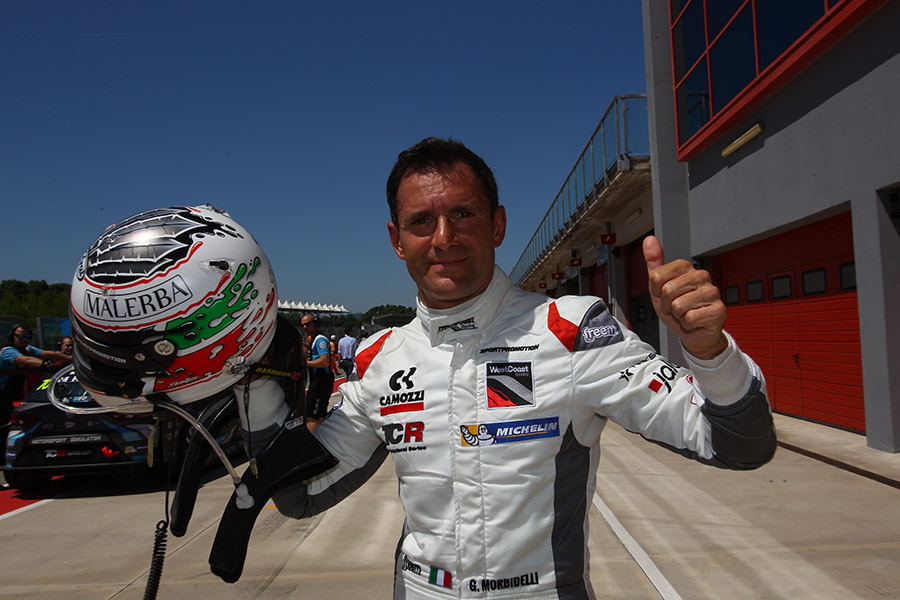 Italian fans’ favourite Gianni Morbidelli achieved his first pole position of the season for his home event at Imola. The former F1 driver set the pace throughout the Qualifying session, posting the fastest laps in both Q1 and Q2.
His best lap of 1:53.228 was only 0.057 faster than Pepe Oriola’s 1:53.285, which promises a very close fight between them in Race 1.
Davit Kajaia and Stefano Comini will fill the second row of the grid, while Mikhail Grachev and Mat’o Homola will share the third row.
The Qualifying session was also incredibly close, with the nine fastest drivers covered by less than eight tenths.
Jordi Gené and Sergey Afanasyev qualified in tenth and ninth respectively and will be on the front row of the top-ten reversed grid for Race 2. Actually James Nash had posted the ninth fastest lap, but he was demoted to 11th after the Stewards disallowed his fastest lap for trespassing the track limits.

Morbidelli said: “I think this was the maximum we could do and we scored five points for the championship, so I am happy. I wasn’t able to do better than this, even though I expected a little bit more, but when the temperature goes high for us it’s a little bit complicated. The SEAT is very close, even when Oriola has extra kilos, it’s unbelievably quick; twenty kilos in Imola is worth around half a second. Let’s see in the race. Imola is my home circuit and the atmosphere is good so we are happy. Up until now we’ve done a good job but we have to carry on.”

The first race will start this afternoon at 14.15 local time, over a distance of 13 laps.

Q1: 1-2 for WestCoast Racing
WestCoast Racing’s Gianni Morbidelli and Mikhail Grachev posted the two fastest laps in Q1; the Italian driver clocked a provisional best time of 1:53.594 and then improved to 1:53.270 that was good enough for first position. As for Grachev, he moved up to second with a lap of 1:53.763, ousting Pepe Oriola to third (1:53.828) and Stefano Comini to fourth (1:53.992).
Midway through the session Jean-Karl Vernay outbraked himself at the Variante Alta and hit Alain Menu’s car. Vernay was forced to pit for repairs and could not rejoin, while Menu continued but was unable to improve his lap time and eventually was the last driver to make the cut for Q2.
The first of those who were eliminated after Q1 was Jordi Oriola. The young Spaniard had a troubled session: first he went off at the Villeneuve chicane and rejoined, then he had a fast lap disallowed by the Stewards for transgressing the track limits and finally was demoted from 12th to 13th by Attila Tassi’s final improvement and remained out by only 8 thousandths of a second.
The following drivers advanced to Q2: Morbidelli, Grachev, P. Oriola, Comini, Homola, Kajaia, Borković, Afanasyev, Tassi, Nash, Gené and Menu.

Q2: Morbidelli wins his first pole
Gianni Morbidelli confirmed his pace and emerged as the fastest in Q2 as well with a lap of 1:53.228 that gave him pole position ahead of Pepe Oriola who was slower by only 0.057 seconds (1:53.285).
Davit Kajaia was also impressive, qualifying in third (1:53.569) ahead of Stefano Comini (1:53.738) and Mikhail Grachev (1:53.855).
Dušan Borković had his times disallowed for exceeding the track limits and dropped to 12th.