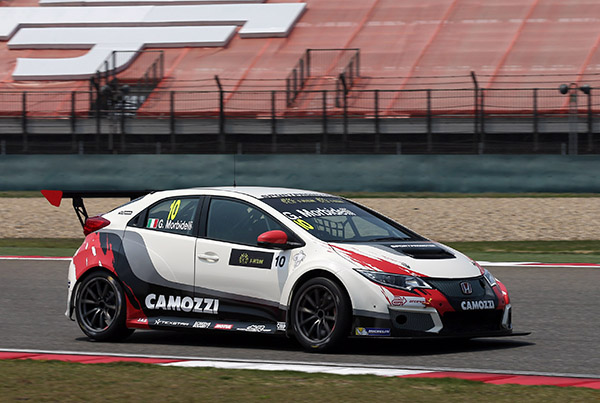 The Honda Civic dominated today’s qualifying session at Shanghai, where the WestCoast Racing cars of Gianni Morbidelli, René Münnich and Kevin Gleason posted the three fastest laps in Q2.
Liqui Moly Team Engstler’s Mikhail Grachev gave the Audi TT a brilliant fourth position on the grid for Race 1, followed by the best of the SEAT drivers: Pepe Oriola in fifth and Hungarian teenager Norbert Tóth in sixth.
Andrea Belicchi and Michel Nykjær qualified in tenth and ninth positions respectively, that will grant them the front row in the starting grid for tomorrow’s Race 2.
Craft-Bamboo Lukoil’s Jordi Gené and Sergey Afanasyev were both eliminated after Q1.
The first race will start today at 13.25 local time on the distance of 10 laps or 25 minutes.

Qualifying 1: Gené and Afanasyev fail to make the cut
Oriola opened hostilities with a provisional fastest lap of 2:18.229 that was soon beaten by Morbidelli’s 2:17.824.
Münnich improved further to 2:17.065, but Morbidelli settled the matter for good with a lap of 2:16.474 that was not to be beaten.
During the final stages of the session, Gleason (2:17.364) and Grachev (2:17.829) climbed to third and fourth respectively, while Afanasyev and Gené unsuccessfully attempted to make the cut as their cars suffered from a lack of speed on the straight.
The following drivers advanced to Q2: Morbidelli, Münnich, Gleason, Grachev, Engstler, Belicchi, Oriola, Tóth, Comini, Nykjær, Veglia and Tengyi.

Qualifying 2: Morbidelli dominates the field
Gleason posted a provisional fastest lap of 2:16.542 and seemed to be bound for a second consecutive pole position. His hopes were soon frustrated when Morbidelli crossed the line with an impressive 2:15.798. No one else was able to break the 1:16. wall
Münnich set two consecutive laps of 2:16.348 and 2:16.267 to qualify in second position, while Grachev’s 2:17.179 was good enough to place his Audi TT in fourth behind the Honda trio.
Oriola’s last attempt resulted in a 2:17.206 that gave him fifth position ahead of Tóth (2:17.349).