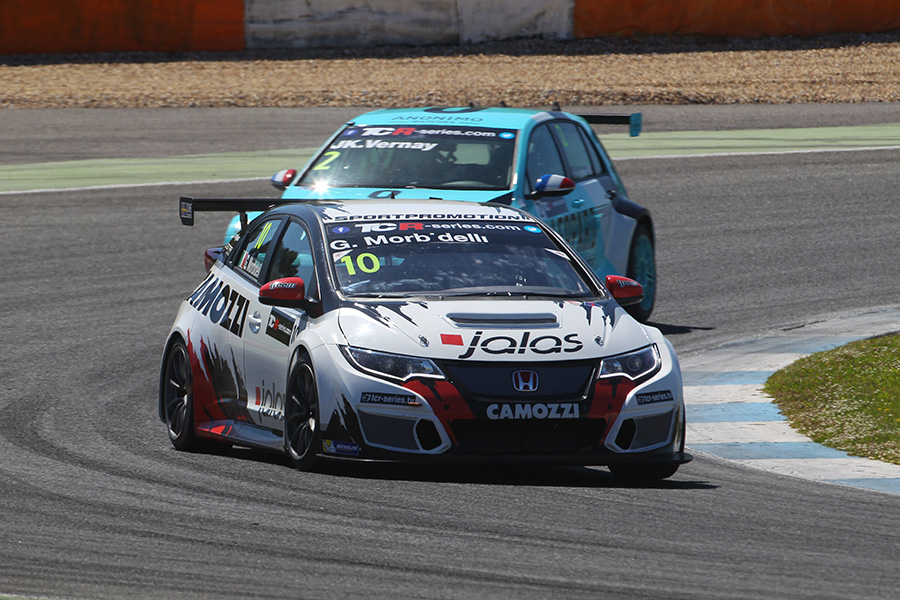 Gianni Morbidelli and his WestCoast Racing Honda Civic took their first win of the season in a lively Race 1 at Estoril, which heated up in the second half. Despite having had less practice mileage than his direct rivals, the Italian put in a great performance, trailing Mat’o Homola, who led most of the race.
The Slovak defended his position hard, but from mid-race onwards he struggled with the deterioration of the front tires and eventually had to surrender 3 laps from the end. Later he lost two more positions to Leopard Racing’s Volkswagen Golf cars of Jean-Karl Vernay and Stefano Comini, who clinched their first podium finishes of the year.
The Craft-Bamboo Lukoil duo of Sergey Afanasyev and James Nash took 5th and 6th, followed by Aku Pellinen and Pepe Oriola.
On his comeback to the series, Loris Hezemans was a good 9th, while the other Baporo Motorsport SEAT of local hero Francisco Mora took the last available point.
Oriola and Morbidelli are now on top of the standings on equal points.
The second race will kick off at 17:05 local time.

Key facts
Start – Morbidelli takes the best start ahead of Homola, Vernay, Pellinen, Comini, Afanasyev, Nash and Oriola
Lap 1 – Borkovićrecovers to 10th after starting from the back of the grid
Lap 2 – Homola attacks Morbidelli at the beginning of the second lap and takes the lead; Gleason pits with engine problems
Lap 3 – Pellinen is passed by both, Comini and Afanasyev; Cerruti pits with transmission problems; Kajaia goes very wide on the grass but rejoins
Lap 4 – Nash takes 6th from Pellinen; Mora passes Rangoni for 13th.
Lap 6 – Rangoni stops at Turn 10 with an open wheel (front left); Cerruti rejoins the race
Lap 7 – Grachev passes Borkovic for 10th, while Mora fights with Kajaia for 12th
Lap 8 – Hezemans chases Oriola, who is eighth and hits the tyre pack at Turn 9
Lap 9 – Morbidelli is closing in on Homola and tries a first attack at the “esses”
Lap 11 – The fight between Homola and Morbidelli heats up, with the two making contact and driving abreast in the “esses”
Lap 12 – Morbidelli eventually manages to pass Homola in Turn 3; the latter is unable to resist also to Vernay
Lap 13 – Comini passes Homola for third
Lap 14 – Grachev passes Hezemans for 9th and they make contact
Lap 15 – Morbidelli wins from Vernay, Comini and Homola; the last thrill is a contact between Borkovićand Grachev who were fighting for ninth with Hezemans and Mora