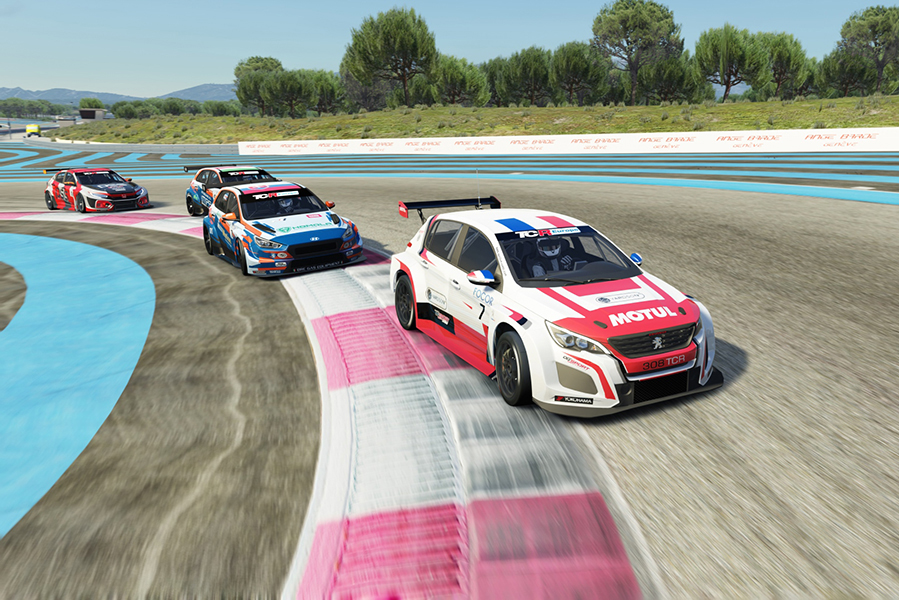 Nagy and Comte share the honours at Le Castellet

Dániel Nagy and Aurélien Comte took the two race victories at the virtual Le Castellet circuit, in the fourth event in the TCR Europe SIM Racing series. For Nagy, his perfect Qualifying record in the series continued, as he secured pole position yet again and delivered a lights-to-flag win in Race 1, finishing ahead of his BRC Racing teammate Mat’o Homola and Gilles Magnus. Race 2 was a far more intense affair, with the lead changing hands several times before Comte took the chequered flag just two-tenths of a second ahead of Homola, giving the digital Peugeot 308 its first win, with Nagy completing the podium places.

In Qualifying, Nagy threw down his customary challenge right at the beginning of the twenty-minute session, setting a time of 2:11.273 on his first competitive lap. Bence Boldizs (2:11.623) and Tamás Tenke (2:11.711) then made it an all-Hungarian top three, with Comte going fourth quickest with a time of 2:11.878. Homola then lapped in 2:11.455 to go P2, before Nagy improved with a 2:11.011, which wouldn’t be beaten. With eight minutes of the session remaining, Gilles Magnus went P2 with a 2:11.385 only for Homola to strike back by setting his best time of 2:11.353 to take second place on the grid for Race 1 alongside his teammate. Magnus would start from third on the grid, with Jimmy Clairet (2:11.470) fourth and Teddy Clairet snatching P5 in the session’s dying moments with a time of 2:11.490.

In Race 1, the top three all made good starts with Nagy leading Homola and Magnus into Turn 1. There were several contacts on the opening lap that saw Teddy Clairet drop from P5 to P8, while the start of the second lap saw Nicolas Baert pass Comte for P9 but then the pair made contact and the Audi driver dropped three places. Boldizs passed Jimmy Clairet for P4 after the Frenchman got the Peugeot slightly sideways with Tenke also passing Clairet on the same lap for P5. Three cars headed down to Turn 1 side by side on Lap 3 in the battle for fifth place, with Clairet dropping to P7 behind Niels Langeveld as a result. On Lap 5, the 2018 TCR Europe champion Mikel Azcona passed Comte for P9, while there was a three-way fight between Viktor Davidovski, Baert and Andrej Studenić brewing for eleventh and twelfth places (and therefore the front row of the reversed grid for Race 2). On Lap 7, Davidovski first passed Studenić for P12 and then Baert for P11. Lap 9 then saw Langeveld pass Tenke for P5 at the chicane but there were no other changes among the top ten, so Nagy was able to take his fifth victory from seven races and Homola made it a 1-2 for the BRC Racing Hyundai cars, while Magnus completed the podium. A controversial incident at the final corner saw Studenić finish P12 after contact with Baert, and so Studenic would start Race 2 from pole.

Race 2 was far livelier, with the leading positions under attack right from the moment the start lights went out. Studenić led into Turn 1, but Comte had already passed Davidovski for P2 off the start line and would snatch the lead moments later. Azcona moved up to P2 and Homola to P3 after both passed Studenić and Davidovski. There was contact between Tenke and Magnus, with the unlucky Tenke then hitting Lewis Kent as he rejoined after spinning off. Nagy, meanwhile, had taken advantage of the incidents and was soon up to P5. On Lap 2, Langeveld’s Audi passed the Peugeot of Jimmy Clairet for sixth place, with Homola grabbing second place from Azcona. The Spaniard then made a mistake going through Turn 3 on Lap 3 and dropped to fourth place behind Davidovski. Nagy saw an opportunity to pass Azcona, but the pair made contact and the Hyundai ran wide. Going down the second part of the Mistral straight, however, Nagy again attacked the CUPRA and this time the move was successful. Azcona then started to drop down the order and would eventually finish tenth. Two terrific battles then ensued: between Comte and Homola for the lead and between Davidovski and Nagy for third. On Lap 8, Homola attacked Comte into the chicane, while Davidovski was furiously defending P3 from Nagy. There was contact between Homola and Comte at the final turn, which allowed Homola to take the lead while Nagy edged past Davidoski for third place. On the following lap, however, Comte retook the lead at the chicane and grimly held on for the final lap and a half to take his maiden victory in the series. Behind him Homola, Nagy and Davidovski crossed the line in the order.

The results from Le Castellet mean that Nagy has stretched his lead from 21 to 56 points over Boldizs, while Magnus moved into third place a further 24 points adrift. The next event will be at the virtual circuit of Zolder on June 24th.