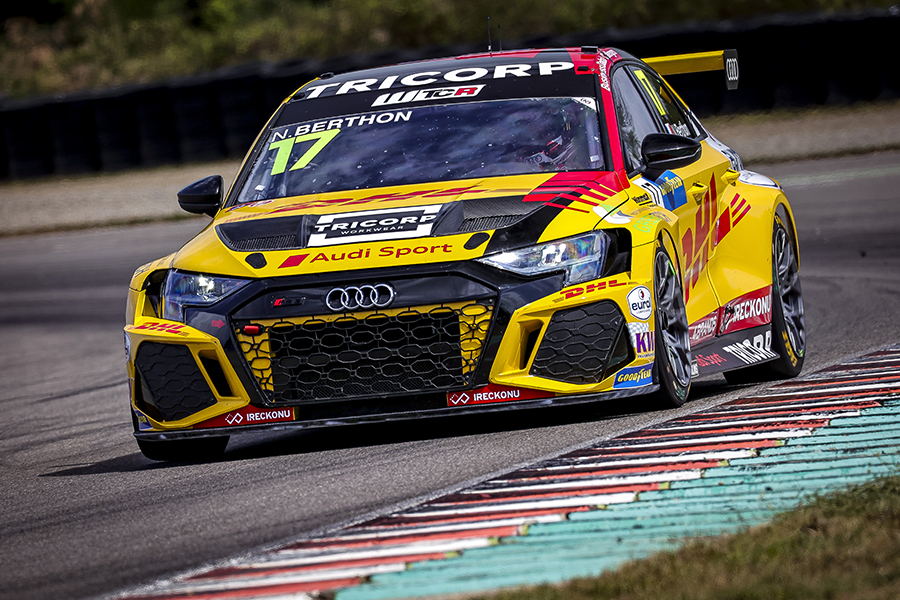 Nathanaël Berthon won the first WTCR race at the Anneau du Rhin, becoming the first driver to win an international-level event at the small French circuit. Berthon’s Audi finished ahead of the pole-sitting Honda of Néstor Girolami who was able to gain on Mikel Azcona in the drivers’ championship.

Girolami had a good launch from the pole, but Berthon was able to get a better run around the outside of Turn 1 and slotted into the lead, while Azcona in his Hyundai Elantra also brought himself up to be side-by-side with Girolami heading to Turn 2, but eventually had to stay behind.

Esteban Guerrieri’s Honda emerged fourth ahead of Gilles Magnus’ Audi, but it was clear Magnus had more pace than Guerrieri, as he continued to pressure the Argentine over the next few laps. On lap five at Turn 2, Magnus went for a small gap down the inside of Guerrieri’s car, but the two made contact and Guerrieri spun across the track and pitted to replace his damaged tyres.

Magnus now set about trying to pass Azcona, eventually getting past the Spaniard at the final corner on lap 12. Three laps later he mounted an attack on Girolami for second, but the Honda driver was able to stay ahead, and Magnus briefly fell back behind Azcona but was able to immediately take the spot back.

Up front, Berthon was managing the pace, keeping Girolami just behind and teammate Magnus within striking distance, but Magnus was unable to make his way past. Berthon went on to win with Girolami and Magnus completing the podium, but Magnus’ contact with Guerrieri resulted in a five second penalty that dropped him to seventh and promoted Azcona to third.

Azcona’s championship lead has been reduced to 28 points over Girolami, with Rob Huff third, 63 points behind.

The final race of the day is scheduled for 16:15 CEST, with Comtoyou Team Audi Sport’s Mehdi Bennani due to start from pole position in his Audi RS 3 LMS.