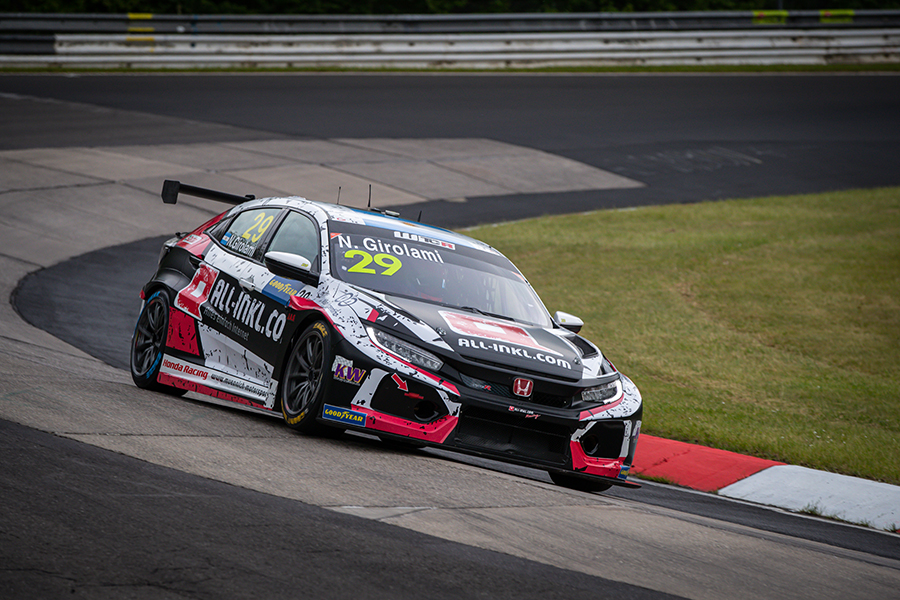 Néstor Girolami has taken pole position in a close-fought qualifying session at the Nürburgring, with the Münnich Motorsport Honda driver outqualifying the new Hyundai Elantra N of Jean-Karl Vernay but just under a second on the 25km circuit.
Right from the start of the session, it was the Honda cars controlling the pace, with 21-year-old Hungarian Attila Tassi fastest of all on the first run, leading his Münnich Motorsport teammate Esteban Guerrieri by just over a second, while local driver Luca Engstler showed the Hyundai cars were in the mix as well, third fastest after one run.
The main improvements came on the field’s second lap. Tassi unfortunately had a ragged lap and lost almost ten seconds, sliding across the circuit in sector three, which left Girolami to pick up the mantle, with the Argentine topping the results sheets with a time of 8:54.791.
Jean-Karl Vernay emerged as the fastest Hyundai driver, putting his Elantra second, with Guerrieri back in third, while Engstler dropped to fourth, and Tassi’s first lap wasn’t good enough to keep him in the top ten.
With time left for just one more run, there were only a few minor improvements as light rain was falling on the far side of the circuit, with Santiago Urrutia the only driver to make a significant improvement, coming out as the top Lynk & Co qualifier in fifth, 2.5 seconds from Girolami’s time.
Tom Coronel came out as the best-placed of the new Audi RS 3 LMS drivers, qualifying in eleventh, painfully just two-thousandths of a second behind Yvan Muller’s Lynk & Co, which means the Frenchman starts tomorrow’s first race from the top ten reversed grid pole, while Coronel will be outside the top ten for both races.
It was a difficult session for the Zengő Motorsport CUPRA cars, with Rob Huff emerging as the fastest driver, down in 18th position. His teammate Mikel Azcona had a difficult session, only setting one competitive lap after breaking the front splitter of his CUPRA Leon Competición on his first flying lap, while Bence Boldizs and Jordi Gené qualified on the final row of the grid.
“It’s unbelievable,” said Girolami after qualifying. “This was an amazing lap. To get pole here two years in a row was never going to be easy. We put everything together on this lap. I was also improving on my last lap, but then the team told me it was a little bit damp in the final sector, and I didn’t want to make mistakes and cause a red flag.”
The two races are due to start tomorrow at 09.00 and 10:20 local times (CEST).