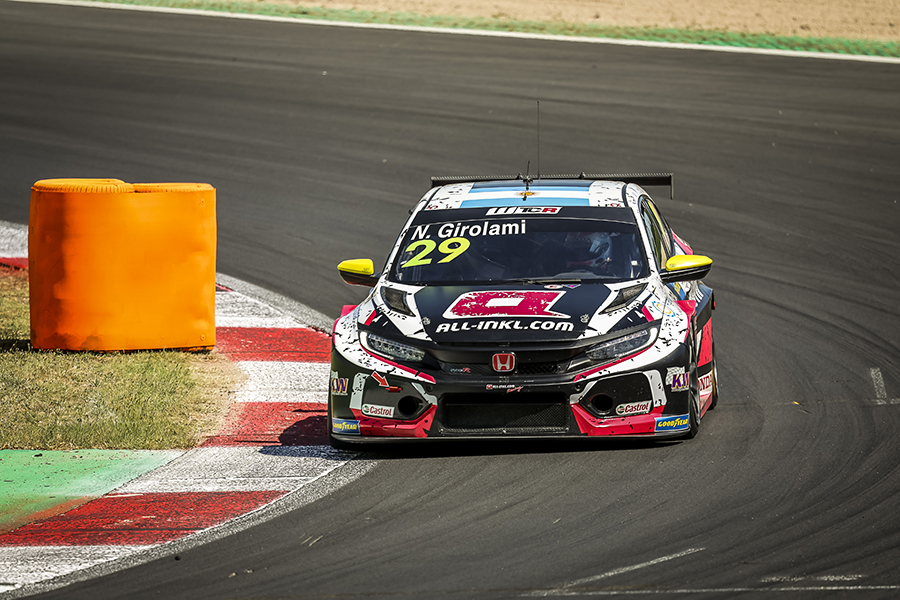 Néstor Girolami has won a dramatic first WTCR race at Vallelunga for the ALL-INKL Münnich Motorsport Honda team, holding off championship leader Mikel Azcona to claim his second win of the season, in a race full of incidents and tyre issues.

The Argentine started from pole position in his Honda Civic and was fought hard up through the first sequence of corners by Azcona’s Hyundai Elantra, but the Spaniard eventually slotted into second, while his teammate Norbert Michelisz dropped to fifth behind the two Comtoyou Racing Audi cars of Nathanaël Berthon and Gilles Magnus.

Girolami and Azcona began to break away, before a series of punctures affected both the Engstler Motorsport Honda cars of Attila Tassi and Tiago Monteiro, and the Audi of Mehdi Bennani after ten minutes of racing, with all three drivers returning to the pits for a new set of front tyres.

On lap 11, it was Berthon’s Audi who was the next to run into trouble, experiencing a puncture at Turn 2, and as he rejoined the circuit, he forced the Audi of Tom Coronel and the CUPRA of Rob Huff off the circuit.

The race was held behind the safety car to recover the debris and gravel which had been scattered all over the tarmac, with the race resuming with two laps to go.

The drama didn’t end there, as Esteban Guerrieri’s Honda dropped from fifth to seventh with what seemed to be a turbo failure, which promoted Tassi to fifth, the first driver who’d actually stopped for new tyres.

Girolami won the race just two-tenths of a second ahead of Azcona, with Magnus finishing in third despite pressure from Michelisz’s Hyundai in the closing stages.

All five of the Cyan Racing Lynk & Co cars didn’t take the start, pulling out of the race at the end of the formation lap, with team manager Fredrik Wahlén saying in a statement: “Our decision has been taken as I don't believe that we can complete a full distance in a safe way.”

Azcona continues to lead the drivers’ championship, now on 184 points, while Girolami moves up to second, 31 points behind, with Huff now third, 46 points behind.

Race 2 is scheduled to get underway tomorrow at 17:10 local time (CEST).