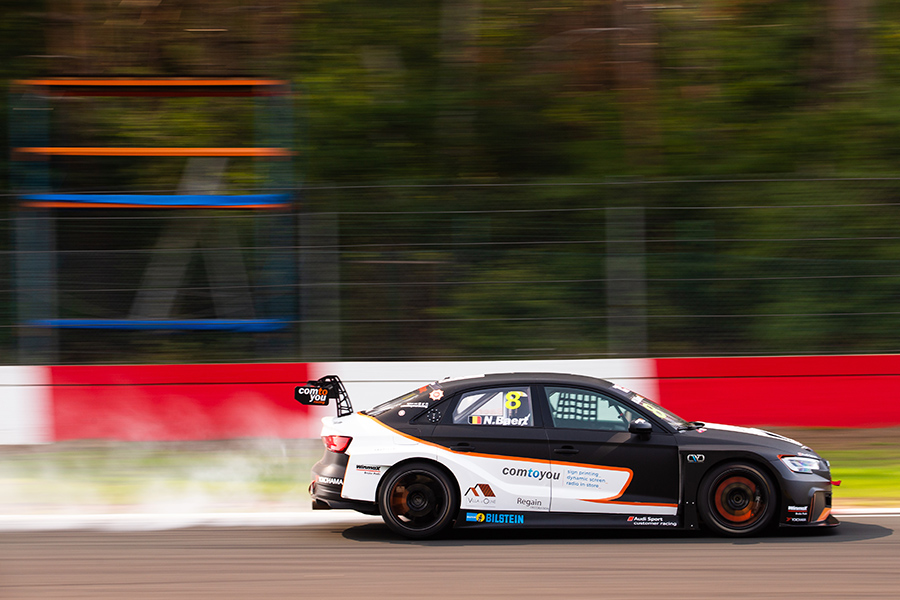 Nicolas Baert confirmed his top form at Zolder and claimed his first pole position in TCR Europe on Comtoyou Racing’s home playground. His teammates Mehdi Bennani and Sami Taoufik qualified third and fourth, completing an impressive result for the Belgian outfit. Only Mat’o Homola was able to split the three Audi cars, posting the second fastest lap in his Hyundai.
The three points for third in Q2 also meant that Bennani took the lead in the standings, two points clear of Daniel Lloyd.
Lloyd and Michelle Halder qualified tenth and ninth, which means that they will share the front row of the reversed grid for Sunday’s Race 2.
The Comtoyou Racing’s trio had already topped Q1, with Baert (1:39.459) fastest from Bennani (1:36.787) and Taoufik (1:38.807). Andreas Bäckman secured a place for Q2 by setting the fourth fastest lap (1:36.915) under the chequered flag, which demoted Teddy Clairet to 13th. Dániel Nagy and Homola ranked fifth and sixth, with Julien Briché in seventh. The eighth-placed Michelle Halder was faster than her brother Mike, while Brutal Fish Racing’s teammates Lloyd, Pepe Oriola and Martin Ryba rounded off the top-twelve.
Amongst those who did not make the cut were the Clairet brothers and John Filippi who had been fastest in yesterday’s first practice but struggled to find a good set-up.
In Q2, Lloyd (1:36.916), Mike Halder (1:36.771) and Homola (1:36.534) set provisional fastest laps before Baert (1:36.155) jumped on top, being nearly fourth tenths faster than Homola.
With five minutes left on the clock, the red flag was waved to move a tyre stack that had been hit by Ryba’s Honda in Turn 8. When the session resumed, only Taoufik and Michelle Halder were able to improve, moving into fourth and ninth respectively.
Julien Briché was seventh fastest in Q2, but he will be moved to the back of the grid for Race 1, following an engine change.
Race 1 will start at 15:30, live streaming at www.tcr-series.com.