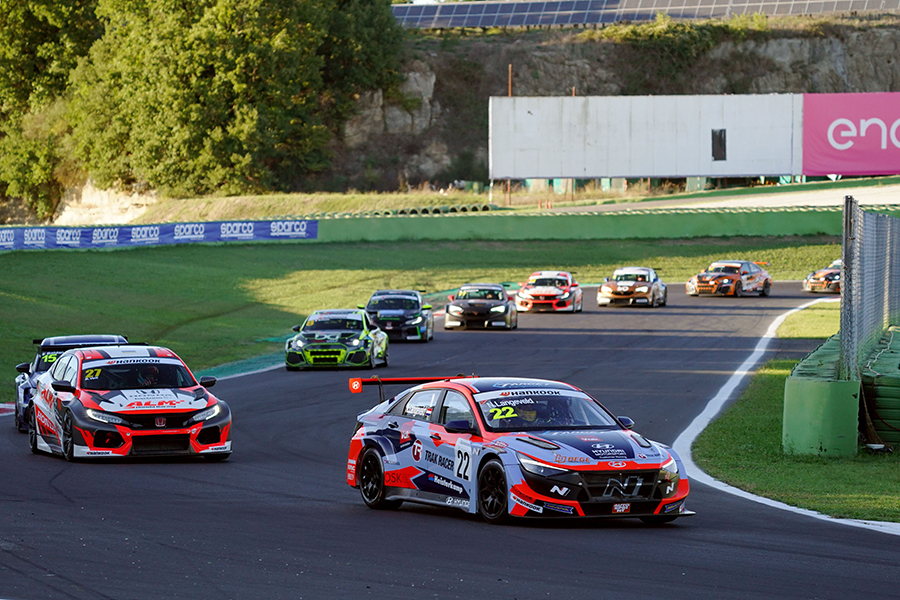 With a victory and a third place in the season finale at Vallelunga Niels Langeveld secured the TCR Italy title at the wheel of his Target Competition Hyundai Elantra N.

Salvatore Tavano who had led the standings until the last race crashed out and made void the three appeals lodged by his team Scuderia del Girasole against the Stewards’ decisions that have suspended the results of yesterday’s Qualifying and Race 1.

The fight began in Qualifying, when Langeveld and Tavano made contact in the out lap; the Stewards considered it a normal race incident and acquitted the Dutchman of a suspected infringement during a red flag period as well. Tavano’s team appealed against both decisions.

Race 1 – Langeveld had beaten Nicola Baldan by two tenths to the pole and led the field at the start from Ruben Volt who got away better than Baldan. During the first lap, half-a-dozen cars were eliminated in two separate incidents and the safety car was deployed. When racing resumed, Langeveld pulled away while Volt, Baldan and Denis Babuin were fighting for second. After starting from P11, Tavano benefitted from the incidents and advanced to eighth, then he passed Mattias Vahtel and Sylvain Pussier moving into sixth. In lap 10, Antti Rammo crashed, and the safety car was called back on track. The green flag was waved with three laps to go. Langeveld continued to lead, while Baldan overtook Volt for second and Tavano passed Carlo Tamburini and Babuin to finish fourth. The title contenders made contact again in the cool down lap and the Stewards handed a 10-second penalty to Tavano that remains suspended because his team appealed once again.

Race 2 – Brothers Felipe and Rubén Fernández shared the front row, with Langeveld and Tavano in P8 and P11. At the start, Felipe led the field, while Rubén kept Volt and Tamburini behind. Tamburini outbraked himself and dropped, while Langeveld and Tavano advanced to fourth and eighth respectively. In lap 3, Cesare Brusa missed the braking point at the hairpin and sent Tavano into a spin, soon afterwards they made contact again at the Curvone with Tavano crashing at high speed, which prompted the safety car into action. At the restart, Felipe Fernández created a gap, while his brother defended the second place from Babuin. The latter punted the Catalan’s car into a spin during lap 9; Volt seized the opportunity and moved into P2. Moments later, Pussier and Rammo came together and stopped on the track, and so the race finished behind the safety car with Felipe Fernández claiming his maiden win from Volt and Babuin who was demoted to 9th by a 10-second penalty for the incident with Rubén Fernández, which promoted Langeveld to third.