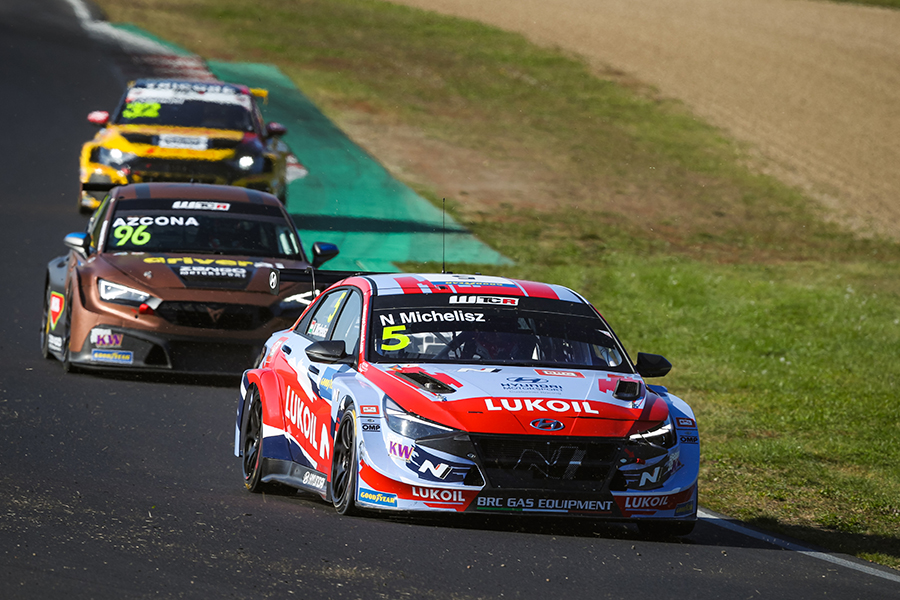 At Most, Norbert Michelisz won the WTCR second race, which was red-flagged after a multi-car incident at the start, and finished just as the sun was starting to set.
The Hungarian driver was able to pass the pole-sitting Mikel Azcona at the first corner when the Spaniard made a mistake and slid his car on cold tyres. Behind there was carnage, as the Honda of Néstor Girolami and the Hyundai of Gabriele Tarquini made contact, with a suspension broken in Tarquini’s car that clambered out of control into the Lynk & Co cars of Thed Björk and Santiago Urrutia; it was a domino effect, and Björk hit Rob Huff’s CUPRA.
With Tarquini, Urrutia, and Huff all stuck in the gravel traps, the race was red-flagged on lap four, before it was resumed behind the safety car.
At the restart, Michelisz led the way with Azcona keeping him close company, but he was never close enough to make an attack for the lead.
Esteban Guerrieri was up to third and fighting to keep back Yann Ehrlacher.
Jean-Karl Vernay, who looked set to score good points in sixth, was given a drive-through penalty with four laps to go as his car wasn’t resting on its wheels at the five-minute board, which dropped him to 15th, the last points-paying position.
Michelisz went on to win, his first race victory since Malaysia, 2019, when he won the WTCR title.
Ehrlacher’s fourth place keeps the Frenchman in the lead of the championship, now 20 points clear of Guerrieri, while newly crowned TCR Europe champion Azcona moved up to third in the standings, 26 points behind.
The WTCR will resume next weekend at Pau-Arnos in France for rounds 11 and 12.