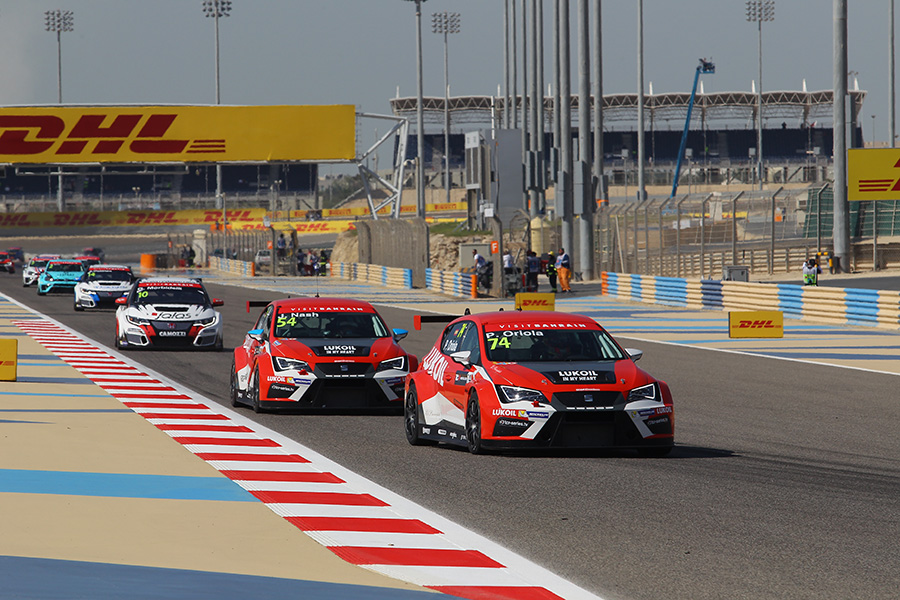 Pepe Oriola performed an encore at the Bahrain International Circuit. After victory in yesterday’s night Race 1, the Spanish driver and his SEAT León won the second race in a sunny and hot day. Oriola managed to recover from the sixth position on the grid and took the lead from Kevin Gleason’s Honda Civic on lap 8 of 10. He eventually crossed the line ahead of James Nash in a 1-2 finish for Team Craft-Bamboo Lukoil.
Behind them, Gleason and his WestCoast Racing teammates Aku Pellinen and Gianni Morbidelli challenged each other for the last spot on the podium. Gleason and Morbidelli made contact; the American was forced to stop, while the Italian suffered from a flat tyre, which handed third to Pellinen.
Dušan Borković was classified fourth, followed by Davit Kajaia, Mat’o Homola and Sergey Afanasyev. Jordi Oriola (8th) and Luigi Ferrara (10th) scored the first points in the Drivers’ championship for the new Opel Astra and the Subaru STi respectively, while Morbidelli limped in ninth.
The reigning champion Stefano Comini and Mikhail Grachev retired after making a contact, while Jean-Karl Vernay was also eliminated for the consequences of a racing incident.
The TCR International Series will resume on April 23 and 24 at Estoril, Portugal, for rounds 3 and 4.

Key facts
Start – The Honda cars of Gleason and Pellinen jump ahead of the Volkswagen cars of Kajaia and Vernay that start from the front row; Belicchi’s Opel stalls
Lap 1 – Vernay’s rear bumper is hanging loose after a contact
Lap 2 – Vernay loses three places to P. Oriola, Nash and Pellinen; Homola and Morbidelli fight for sixth; Comini and Grachev fight hard for 9th and clash, the former retires with a broken suspension
Lap 3 – P. Oriola attacks Pellinen and passes him moving up to second
Lap 4 – With a brilliant move Nash passes Pellinen and P. Oriola at the braking for first corner to take second; Morbidelli passes the Finn for fourth; Grachev pit and retires
Lap 5 – P. Oriola retakes second from Nash, Gleason extends his lead to 1.4 seconds
Lap 6 – P. Oriola closes the gap from Gleason to 0.8; Al-Khalifa passes Cerruti for 13th
Lap 7 – Borković passes Kajaia and takes 7th; Vernay retires with brakes problems
Lap 8 – P. Oriola takes the lead muscling his way past Gleason who has to concede also second to Nash; Cerruti retires with a broken drive shaft
Lap 9 – Morbidelli manages to keep Pellinen at bay and to pass Gleason for third; they make contact and the American stops at the pit exit
Lap 10 – Pellinen takes third from Morbidelli, who has a flat tyre and drops to ninth; P. Oriola wins from Nash and Pellinen