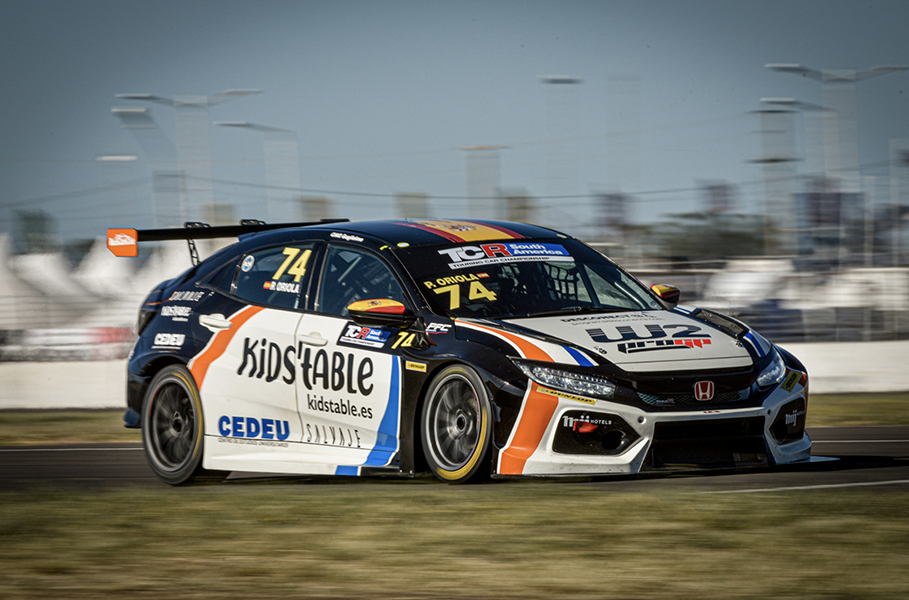 Pepe Oriola has taken his fourth win of the 2021 TCR South America championship at the Concepción del Uruguay circuit in Argentina, and now has a 22-point lead in the drivers’ championship over Rodrigo Baptista before tomorrow’s final race.
Baptista had qualified his Cobra Racing Audi RS 3 LMS on pole position, by just 19-thousandths of a second ahead of Oriola’s W2 Pro Honda Civic.
Oriola’s teammate Raphael Reis, the only other contender for the championship qualified third on the grid, while Fabricio Pezzini put his PMO Motorsport Lynk & Co fourth on the grid but didn’t make the start due to a fuel pump issue.
Oriola cruised into the lead at the start and kept Baptista at a safe distance; the latter was defending hard against the Squadra Martino Honda of Dorian Mansilla, and Reis’ Honda.
Mansilla kept applying pressure on Baptisa, and on lap ten at Turn 7, both Mansilla and Reis were able to get past the Brazilian.
This briefly meant Oriola was set to secure the championship today, but one lap later, Mansilla’s front-right tyre punctured, putting him out of the race and promoting Reis to second and Baptista up to the final podium spot.
Oriola’s win means he extended his championship lead to 258 points, 22 points clear of Baptista, with 25 points available for a win - meaning only a victory for Baptista, and a DNF for Oriola, will prevent the Spaniard from securing the inaugural TCR South America drivers’ title.
Race 2 will follow tomorrow at 09:00 local time (13:00 CET); live streaming at www.tcr-series.com.