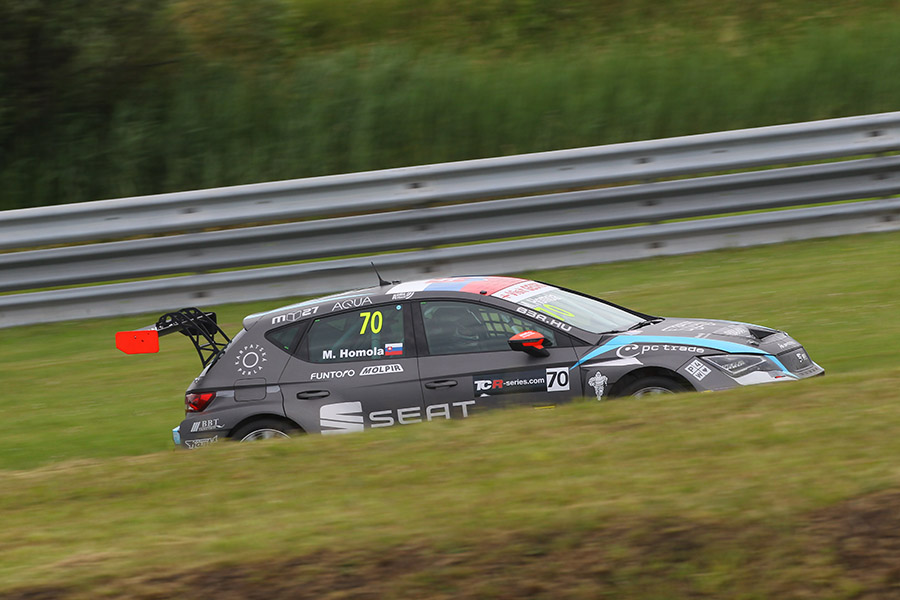 Practice 1 – Homola jumps on top by the end

B3 Racing Team’s Mat’o Homola emerged as the fastest by the end of the session. With six minutes left on the clock, the Slovak driver jumped on top with a lap of 1:35.716 that he suddenly improved to 1:35.354, inflicting a gap of more than five tenths to Pepe Oriola who had been leading the timesheet for most of the time with a lap of 1:35.937.
Oriola’s teammate at Craft-Bamboo Lukoil, James Nash, was classified third (1:35.947), making a SEAT 1-2-3 on top of the first practice.
Petr Fulín was an impressive fourth in the Mulsanne Racing Alfa Romeo Giulietta; the Czech posted a lap of 1:36.155 halfway through the session that provisionally placed him in third position, only two tenths behind Oriola. However he stopped on the track a few moments later, as smoke was filling the cockpit; the team is now checking on the reasons.
Stefano Comini was the fastest of the Volkswagen drivers, in fifth position (1:36.225), while the two WestCoast Racing Honda cars of Mikhail Grachev and Gianni Morbidelli were only placed in 11th and 12th.
A few drivers received warnings for not respecting the track limits and some had moments, like Morbidelli who spun, Dušan Borković who visited the gravel trap and Niklas Mackschin who was driving sideways a couple of times.
The second Practice will take place at 11:35.