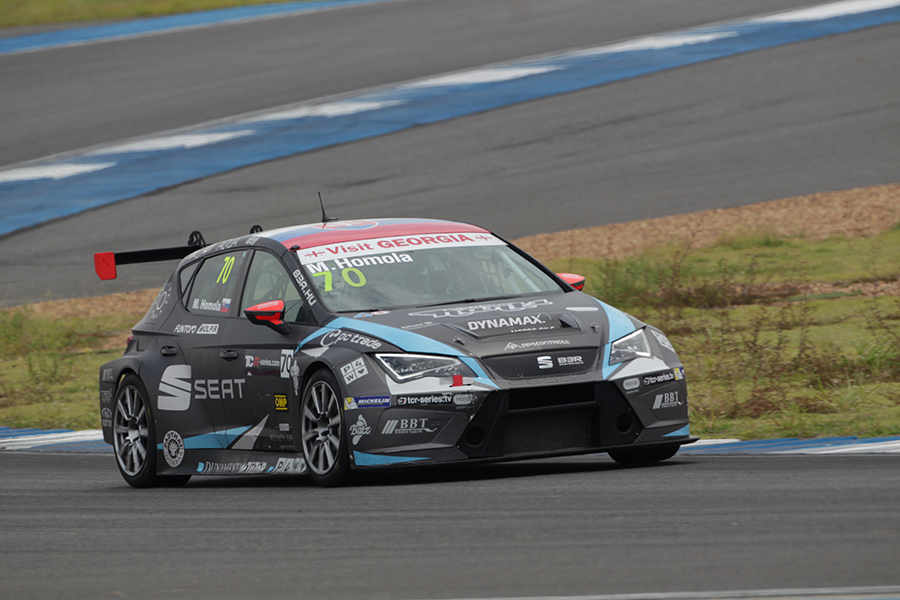 Mat’o Homola posted the fastest lap of 1:44.199 in the first Free Practice at Buriram’s Chang International Circuit. The B3 Racing Team’s driver topped the time sheet towards the end of the session after Petr Fulín, Jack Lemvard and Gianni Morbidelli had clocked provisional fastest laps.
In the humid heat of the Thai morning, Fulín’s Alfa Romeo Giulietta was clocked at 1:44.869 that was the first significant lap time. The Czech driver retained the lead for the first half of the session, before he was demoted to second by Lemvard’s 1:44.600 in the Vattana Motorsport SEAT León. Morbidelli was the next one to improve: at the wheel of his WestCoast Racing Honda Civic, he completed a provisional fastest lap of 1:44.440 that he immediately improved to 1:44.349. Homola settled the matter with and even fastest lap of 1:44.199 that Morbidelli was not able to beat, although he improved again to 1:44.296.
A trio of Thai drivers ranked from third to fifth: Lemvard (1:44.600), Kantadhee Kusiri (in the Team Eakie BBR Kaiten Honda Civic (1:44.674) and Narasak Ittiritpong in the Vattana Motorsport Honda Civic (1:44.761). Fulín slipped to sixth (1:44.869) ahead of Pepe Oriola (Craft-Bamboo Lukoil SEAT León – 1:44.915) and Jean-Karl Vernay (Leopard Racing – 1:44.990) in the first of the Volkswagen Golf cars.
It was a very close session, with the eleven fastest cars covered by only one second. The Top Run Subaru WRX of Luigi Ferrara ranked in 12th position, 1.2 seconds off Homola’s pace. It was an encouraging result after yesterday’s issue with a gearbox sensor, as the Japanese car completed 11 laps consistently improving its lap times.
Craft-Bamboo Lukoil’s Sergey Afanasyev could not post any valid lap times, as his SEAT remained in the garage while the mechanics were working to fix a loose exhaust.
The second Practice will take place at 12:55.