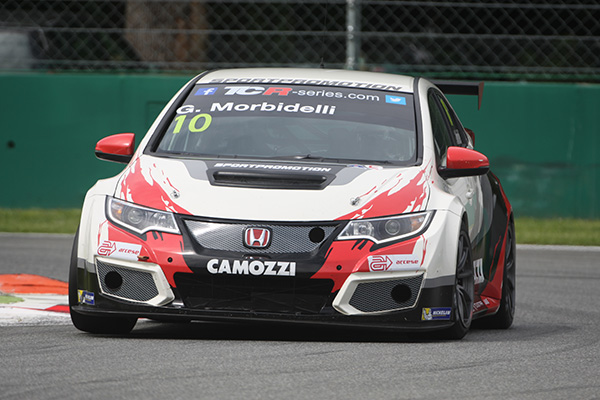 The trio of West Coast Racing Honda Civic set the pace in the morning practice at Monza, while Davide Roda escaped from a dramatic crash at Lesmo 2 that caused the session being red flagged.
After posting the fastest lap in yesterday’s testing, Gianni Morbidelli proved that him and his Honda Civic are perfectly at ease on the fast Italian track and clocked an impressive sequence of consecutive times: 2:02.394, 2:01.158 and 2:01.086 that placed the former F1 driver on top with a gap of nearly half-a-second from the rest of the field.
"We are satisfied, it was a good session for us, the Civic cars go well on this track, especially when temperatures are not high like this morning. I did not complete many flying laps, as I spent time running in the brake pads, but speed was immediately there when I started pushing. We will see how the weekend develops but it's a good start," commented the Italian driver.
Morbidelli’s teammates Igor Skuz (2:02.559) and Kevin Gleason (2:02.614) ranked second and third, while current championship leader Stefano Comini of Target Competition emerged as the best of the rest in his SEAT León posting the fourth fastest time of 2:002.660.
Fernando Monje set the 13thfastest lap (2:04.387) in the Campos Racing Opel Astra; the Spanish team worked on the set up, trying different positions of the rear wing to improve drag and speed.
Tom Boardman completed only a few laps in the Proteam Racing Ford Focus.
The session was red flagged with three minutes left, when Roda’s SEAT went out at Lesmo 2, crashed into the barriers and rolled. The Italian driver was unscathed but the Zengő Motorsport car suffered from heavy damage.
TCR drivers will make their next appearance in the second Free Practice at 12.00 local time.