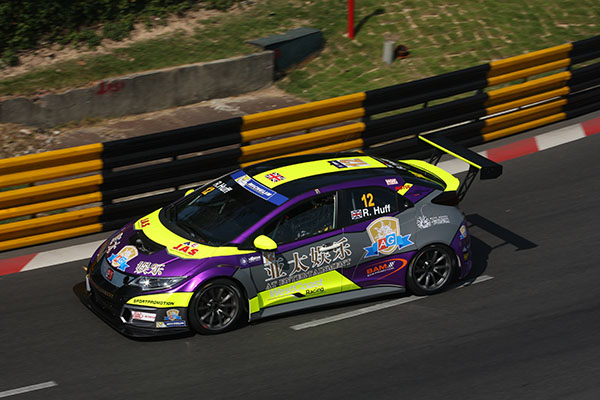 Seven-time Macau winner Rob Huff is already the fastest man on track in his first drive at the wheel of a TCR car. The 2012 world champion completed a lap of the Guia circuit in 2:35.036, inflicting a gap of 1.8 seconds to Jordi Gené who ranked second with a time of 2:36.870.
Title contenders Pepe Oriola and Stefano Comini set the third (2:37.874) and fourth (2:38.768) best laps respectively; and this was an especially brilliant result for Comini who had never driven at Macau before.
Macau racers Henry Ho and Rodolfo Ávila were also impressive, as they were classified in fifth and sixth, beating TCR regulars Sergey Afanasyev and Kevin Gleason. Jordi Oriola and Andrea Belicchi rounded out the top ten, followed by Francisco Mora and James Nash.
Gianni Morbidelli was sidelined for the whole session by a power steering failure, while Alain Menu could not complete any valid laps and stopped on the pit straight due to suspected engine problems.
A few drivers had scary moments and some cars suffered from extensive damage. Josh Files spun at the fast Mandarin bend and broke the rear suspension against the barrier; Lorenzo Veglia crashed at Turn 16; Guillaume Cunnington and Keith Chan hit the barrier at the Lisboa bend. The two hardest crashes occurred in the final stages of the session when Douglas Khoo went off downhill towards Maternity bend and Rafaël Galiana hit the barrier head-on at the “R” bend.
The second free practice will take place tomorrow at 12.30 local time.