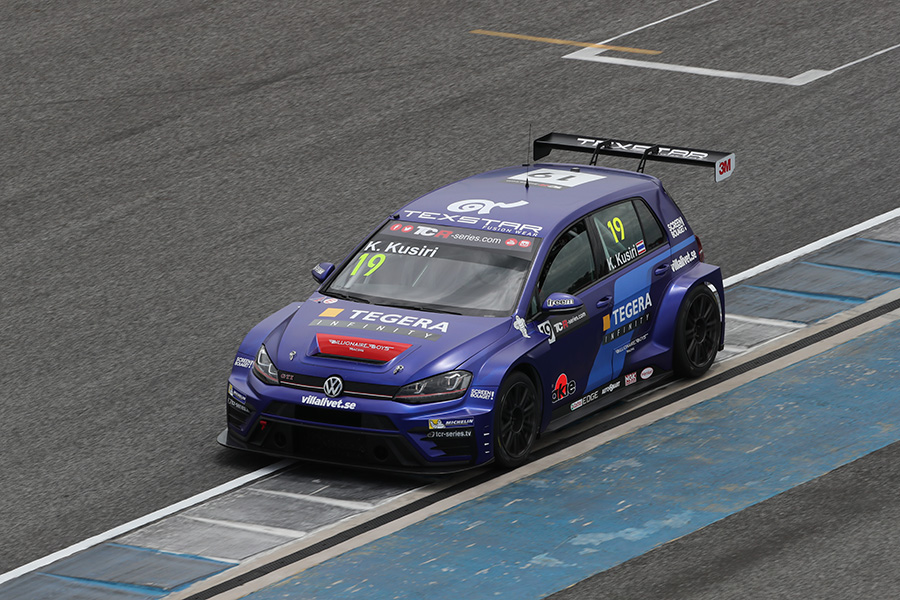 Practice 1 – Kusiri is fastest on his home racetrack

Kantadhee Kusiri showed no awe on his first appearance at the wheel of the WestCoast Racing Volkswagen Golf GTI. The Thai driver took advantage of his good knowledge of the home racetrack and the German car he successfully drives in TCR Asia for posting the fastest lap in the first Free Practice.
It was a very close session, with the ten fastest drivers covered by less than six tenths and the top 15 within the same second.
The Lukoil Craft-Bamboo SEAT cars proved once again that this track suits them, as Pepe Oriola and James Nash were classified second and third, behind Kusiri.
Actually, Oriola was the first driver to break the 1:45 wall, posting a provisional fastest lap of 1:44.797 that was soon beat by Davit Kajaia’s 1:44.584 in the GE Force Alfa Romeo Giulietta.
The next one to improve the fastest lap was Norbert Michelisz (M1RA Honda Civic) who was clocked at 1:44.548, however he was immediately ousted by Nash’s 1:44.513 and Oriola’s 1:44.374. In the meantime, Kusiri was climbing the standings. He moved up to fifth (1:44.774), then to third (1:44.452) and eventually topped the list for good with a lap of 1:44.242.
The latest to improve were Nash (third in 1:44.402), Dušan Borković (fourth in 1:44.427) and Jean-Karl Vernay (fifth in 1:44.439). Michelisz placed the fastest Honda car in sixth (1:44.485), with Mat’o Homola’s DG Sport Opel Astra in eighth (1:44.752).
Stefano Comini ranked a disappointing 14th (1:45.229) in his Cometoyou Racing Audi RS3 LMS, while Homola’s new teammate Mumkong Sathienthirakul was sidelined for the whole session as his Opel stopped on its first lap out due to an electrical issue.
Chariya Nuya topped the TCR Thailand field in his Billionaire Boys Racing Honda, ranking 16th overall (1:45.403).
The second Free Practice will start at 12:30 local time; live streaming at www.tcr-series.com and www.tcr-series.tv.