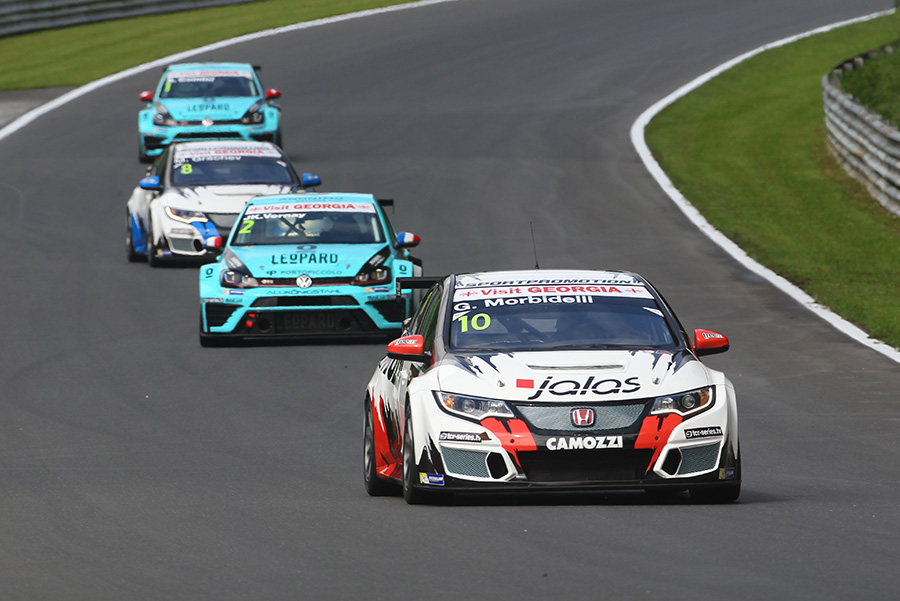 Gianni Morbidelli, Jordi Oriola and Austrian newcomer Harald Proczyk placed three Honda Civic cars on top of the time sheet of the first Practice session at the Salzburgring.
The track was dry, but for some damp patches out of the racing lines. From the beginning Morbidelli proved to be one of the fastest drivers, and only for a few moments, halfway through the session he lost the lead to Pepe Oriola’s SEAT (1:27.820) who was immediately ousted by his brother Jordi’s Honda (2:27.740).
However, the Italian was able to improve further twice, first to 1:27.125 and finally to 1:27.050 that remained the fastest lap until the end of the session. Afterwards, Morbidelli sat in the pit as the WestCoast Racing crew was working to solve a downshifting issue.
In the final part of the session a few drivers moved up in the classification. Jordi Oriola improved to 1:27.264 and settled in second place ahead of Proczyk (1:27.542). Three SEAT drivers ranked from fourth to sixth: Pepe Oriola (1:27.645), Attila Tassi (1:27.905) and James Nash (1:28.089), while local youngster Florian Janits (1:28.142) was placed in seventh in the best of the Volkswagen Golf cars.
Petr Fulín posted the tenth fastest lap (1:28.321) on his first outing at the wheel of the Mulsanne Racing Alfa Romeo Giulietta, while his teammate Michela Cerruti went straight on the gravel at Turn 1 with three minutes left on the clock.
Dušan Borković’s session was spoiled by a loose diffuser; both the Leopard Racing VW Golf cars of Stefano Comini and Jean-Karl Vernay struggled to set fast lap times, as well as Mikhail Grachev’s Honda and Mat’o Homola’s SEAT.
The second Practice will take place at 12:00.