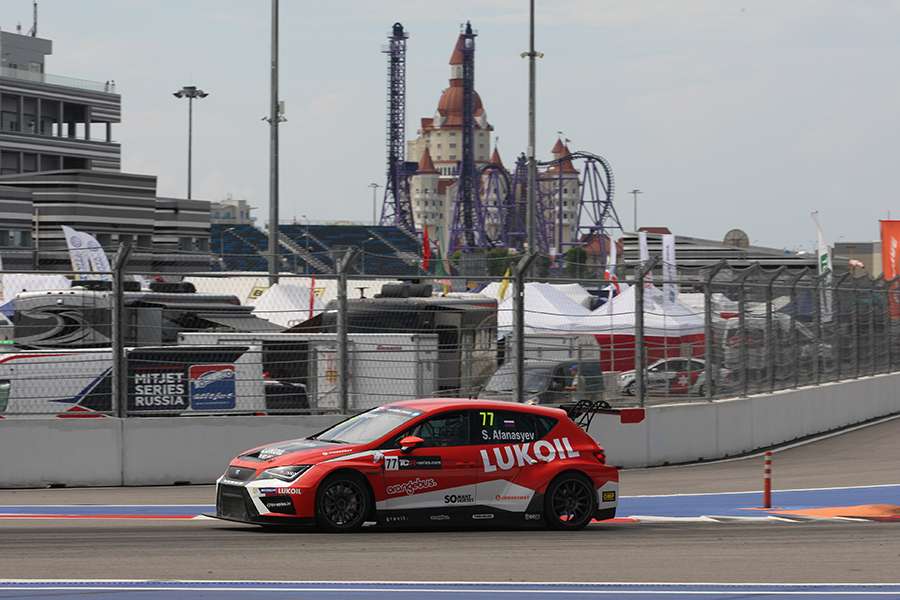 Practice 1 – Oriola and Afanasyev are fastest

Craft-Bamboo Lukoil teammates Pepe Oriola and Sergey Afanasyev topped the time sheet in the first Practice at Sochi Autodrom.
The Spaniard – who is currently leading the championship – clocked a fastest lap of 2:22.022, beating Afanasyev’s time of 2:22.559 by half-a-second. Behind the SEAT duo, Jean-Karl Vernay’s Volkswagen Golf (2:22.557) and Mikhail Grachev’s Honda Civic (2:22.574) were classified third and fourth with slim gaps.

Oriola said: “I had a good feeling since the start of the weekend. We had good info and data from last year, so we have already a good set-up to start from. In the next session, we’ll try something to improve in terms of consumption of tyres and brake pads, but as for the pace, I am happy. I was warned for track limits, but frankly, I only passed them once, because I went wide, with no advantage.”

Vernay commented: “I am still a little bit sick and with this heat, I did not feel very well. Considering this and the fact that it’s my first time here, I am surprised of being third-fastest. The car feels good, although we can improve a lot the set-up, but we have better pace than I thought, except in the first sector. Mostly, though, I tried to do as many laps as possible to get to know the track, which is not easy.”

Morbidelli was not satisfied:“I could only do four laps before encountering a problem with the paddle when down-shifting, and stopped. We could not do much work, it is penalizing to start the weekend like that.”

Lap times improved steadily as the session went by; the major concern were the locusts that had swarmed over the region a few days ago and risk to clog the radiators’ grids.
Oriola and James Nash were among the fastest drivers from the beginning, swapping positions on top of the time sheet with Dušan Borković and Gianni Morbidelli who eventually ranked seventh and tenth respectively.
Petr Fulín’s Alfa Romeo Giulietta missed nearly half of the session as the Mulsanne Racing crew worked to fix electrics bugs.
The second Practice will take place at 12:15.