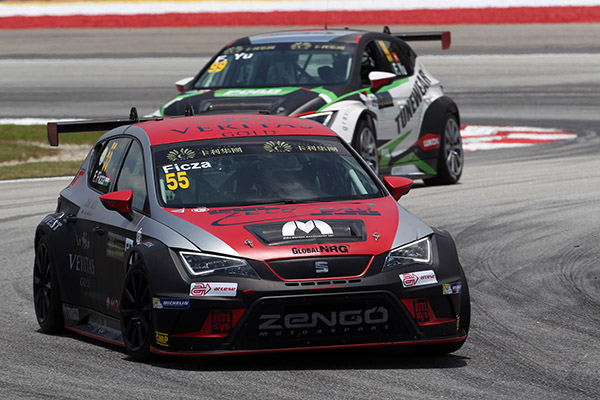 Hungarian teenager Ferenc Fizca created a surprise by posting the fastest lap in the second Free Practice at the Sepang International Circuit.
SEAT León cars topped the time-sheet once again. The Target Competition trio of Michel Nykjær, Andrea Belicchi and Stefano Comini filled the top-three positions in the early stages. Nykjær set a provisional fastest lap of 2:22.396 but was later demoted to second by Belicchi’s 2:20.884.
Halfway through the 20-minute session Craft-Bamboo Lukoil’s Jordi Gené improved the mark with a lap of 2:20.702, but eventually Ficza stopped the clock at an impressive 2:20.103 in his Zengö Motorsport car.
Before the session the TCR technical department had removed the extra kilos from the Honda Civic and Audi TT cars, meaning that all competitors were running on the minimum weight of 1260kg.
This helped Gianni Morbidelli to cut off half-a-second from the gap his Honda had from the fastest time in Practice 1. Morbidelli (2:22.366) and his West Coast Racing team-mates Kevin Gleason (2:22.677) and René Münnich (2:22.958) ranked seventh, eighth and ninth respectively.
Mikhail Grachev was the fastest of the Audi TT duo in 12th position, while Ford and Opel cars struggled with technical problems once again.
Diego Romanini managed to complete his first laps in the Proteam Racing Ford Focus, however he could not post a significant lap time, just like the Campos Racing Opel Astra of Igor Skuz.
TCR International Series activity will resume tomorrow with the qualifying session at 12.30 local time.