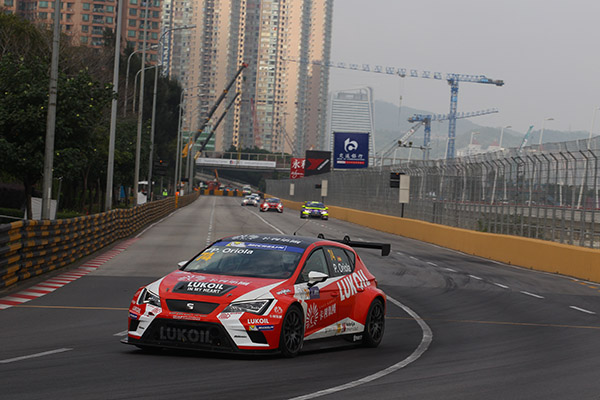 Pepe Oriola tried his best to chase Rob Huff during the second Free Practice on the Macau Guia circuit, but the 2012 world champion’s Honda Civic seems to be uncatchable and set the pace again just like in yesterday’s first practice session.
Jordi Gené (1:36.513) and Pepe Oriola (1:36.935) posted the first significant lap times during the session; the latter improved to 2:35.804 but Huff raised the bar quickly with a impressive lap of 2:33.702 that was fastest by more than two seconds.
Eventually Pepe Oriola improved further to 2:34.811 that was still one second off Huff’s pace, while Stefano Comini climbed to third when was timed at 2:35.373.
Gené ranked in fourth, ahead of Kevin Gleason, Jordi Oriola, Sergey Afanasyev, Andrea Belicchi, Francisco Mora and the Macau duo of Rodolfo Ávila and Henry Ho.
After he was forced out of yesterday’s session due to a power-steering failure, Gianni Morbidelli posted the 12th fastest lap, followed by James Nash who pitted in the latest stages because of a suspected engine problem. Dan Wells also pitted to prevent overheating.
Once again some drivers were involved in different incidents. Guillaume Cunnington spun at the Lisboa bend and rejoined, Francisco Mora broke a rim at the Melco hairpin, Keith Chan crashed heavily at the Mandarin Bend and Douglas Khoo at the “R” bend.
Three cars did not take part in the session: Rafaël Galiana’s SEAT and Josh Files’ Opel for the consequences of the damage they suffered in two different crashes during yesterday’s Practice 1, and Alain Menu’s Subaru due to a terminal engine failure.

The drivers will hit the track again for the Qualifying, Saturday morning at 7.30 local time.