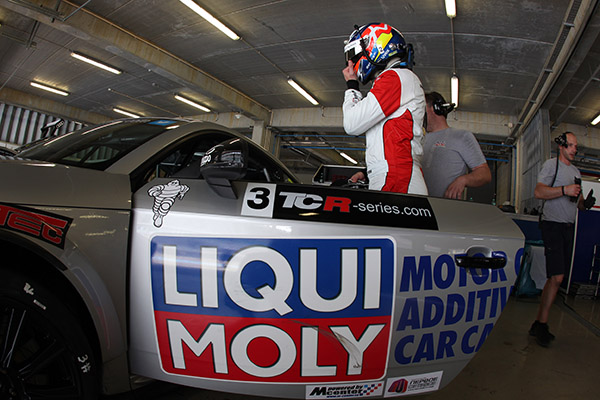 Practice 2 – Thiim is in a league of his own

Nicki Thiim’s domination at the Autódromo Internacional Algarve continued in the second Free Practice in which the Audi driver inflicted a gap of 0.6 second to Pepe Oriola who ranked behind him.
It took three laps to Thiim to settle the matter for good: 1:54.895, 1:54.517 and 1:54.032 was the impressive sequence he timed.
For most of the remaining time no one else was able to be faster than 1:55. In the latest stage Craft-Bamboo Lukoil team-mates Pepe Oriola (1:54.635) and Sergey Afanasyev (1:54.758) climbed to second and third, with Lorenzo Veglia in fourth (1:55.045) but still one second off Thiim’s pace.
Gianni Morbidelli was the fastest of the Honda drivers in eighth position (1:55.899). A couple of cars had issues during the session: both Michel Nykjær and Oscar Nogués stopped along the track. The Dane because of a broken steering and the Spaniard with a flat tyre.
Kelvin Van der Linde’s Audi continued to suffer from technical problems and the young South African missed the whole session.
In the meantime, Campos Racing officially withdrew Armando Parente’s Opel Astra due to an engine failure that occurred during yesterday’s test.
The qualifying session will kick off at 14.00 local time.