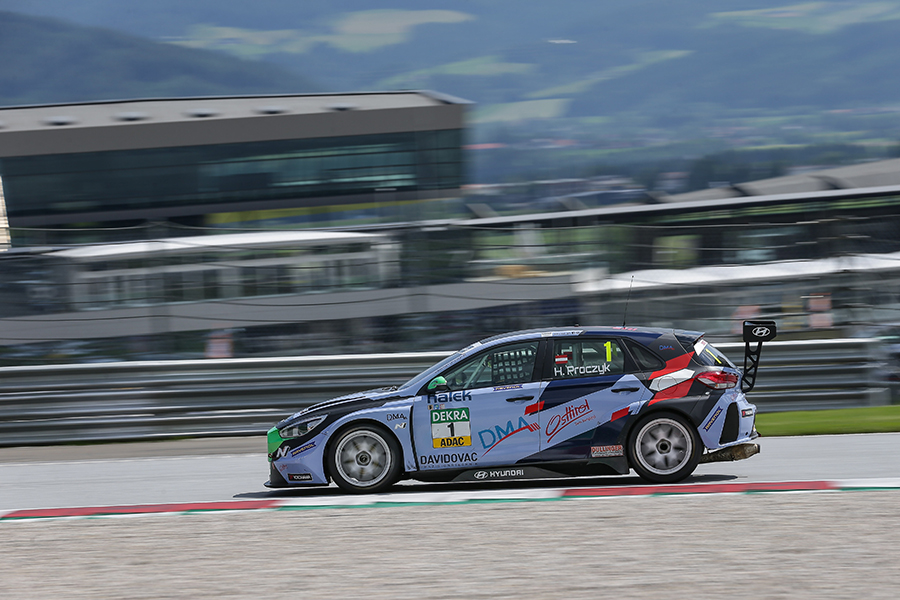 Proczyk storms to victory at the Red Bull Ring

Reigning TCR Germany champion Harald Proczyk took a stunning victory in the opening race at the Red Bull Ring after a brilliant start saw him leap from third on the grid into the lead by Turn 1.
A chaotic start saw the Audi RS 3 LMS of Antti Buri take to the grass in the dash for the first corner, while contact with Théo Coicaud meant guest driver Gabriele Tarquini pulled up at the exit to Turn 1 with broken steering. The safety car was deployed while Tarquini’s Hyundai was recovered, with Proczyk leading from Julien Apothéloz and Mitchell Cheah, with pole-sitter Sebastian Steibel having dropped to fifth behind Buri.
When racing resumed after two laps behind the safety car, Proczyk caught out the chasing pack and began to build a comfortable lead. Cheah was soon battling with Apothéloz for second place and both Coicaud and Max Hesse passed Steibel, who dropped to seventh.
On lap 5, contact between Bradley Burns’ Honda Civic and the Hyundai of Lukas Niedertscheider saw the British youngster up on two wheels before heading towards the pits and retirement. The incident clearly hadn’t slowed Niedertscheider, who was soon up into eighth place.
The race then settled down for several laps, with Proczyk opening up a slight gap over Apothéloz, Cheah and Buri while there were several changes of position behind the scrap for the podium places. Then, at the start of lap 11, there was contact between Cheah and Apothéloz and both Cheah’s Volkswagen and Buri’s Audi quickly passed the CUPRA for second and third places respectively.
While the battle for second and third positions raged, several drivers received drive-through penalties for overtaking while the safety car was on track. Michelle Halder steadily improved to eighth, while Hesse dropped outside the top ten.
Despite a dramatic late series of challenges, Buri failed to snatch second place away from Cheah and so had to settle for third place ahead of Apothéloz. Proczyk, however, was never troubled and took a straightforward win on home ground. Coicaud was fifth, Steibel finished sixth and the top ten was completed by Niedertscheider, Michelle Halder, René Kircher and Maurits Sandberg.
Buri now leads the Drivers’ series by nine points from Mike Halder, who slipped to second after being classified as the last-placed finisher, while Proczyk is now in third place on the same number of points as Halder.
Race 2 takes place Sunday at 14.40 CET, with René Kircher’s Audi and Michelle Halder’s Honda sharing the front row of the top-ten reverse grid; live streaming at www.tcr-series.tv.