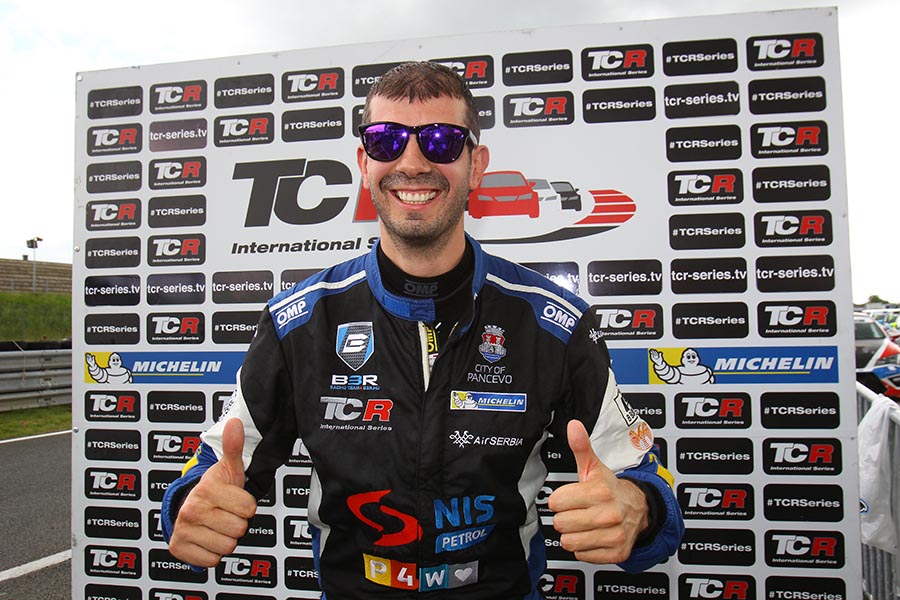 Qualifying - Borković and Homola make 1-2 for B3

B3 Racing Team claimed a great result in today’s Qualifying at Oschersleben, placing two of his SEAT cars on the front row of the grid for tomorrow’s Race 1.
With a somehow unexpected performance that even surprised himself, Dušan Borković won his second pole position of the season and beat his teammate Mat’o Homola by a bit more than two tenths.
James Nash of Craft-Bamboo Lukoil qualified in third position, benefiting from the penalty imposed to Jean-Karl Vernay who had his fastest time disallowed for a track-limit infringement. Similar penalties also affected the results of Gianni Morbidelli, Sergey Afanasyev and Petr Fulín. This promoted Antti Buri to a brilliant fourth position ahead of Afanasyev.
It was a triumphant result for the SEAT cars that filled the first five places, with Morbidelli’s Honda and Vernay’s Volkswagen in sixth and seventh.
David Kajaia and Stefano Comini qualified in tenth and ninth respectively and will be on the front row of the top-ten reversed grid for Race 2.
The first race will start this tomorrow at 12:55 local time, over a distance of 17 laps.

Q1: Oriola is the fastest by far
Pepe Oriola was the only driver so far to break the 1:35 wall, as he posted a fastest lap of 1:34.779 that no one else was able to match.
The drivers were cautious in the early stages, as the track was still drying after a drizzle that had disturbed the TCR Germany first race.
When lap times began to drop, Jean-Karl Vernay set the mark at 1:35.748, but this was soon bettered by Mat’o Homola who jumped on top with a lap of 1:35.294. Oriola was able to go even faster and demoted Homola to second.
Petr Fulín provided the last thrill by moving up from 13th to ninth on his last lap, kicking Mikhail Grachev out of the top-twelve in the process.
The following drivers made the cut for Q2: Oriola, Homola, Comini, Afanasyev, Vernay, Borković, Nash, Morbidelli, Fulín, Kajaia, Tassi and Buri.

Q2: Borković creates a surprise
Dušan Borković set pole position in Q2, nearly matching the Oriola’s record lap from Q1. After being the fastest by far in the first part of the Qualifying, the Spaniard was not able to repeat the performance and finished a disappointing eight.
Homola qualified second (1:35.131), two tenths behind his teammate and beat Vernay’s 1:35.138 by only seven thousandths of a second. However, the Frenchman had his fastest lap disallowed for trespassing the track limits, which helped James Nash (1:35.177) to inherit the third position.