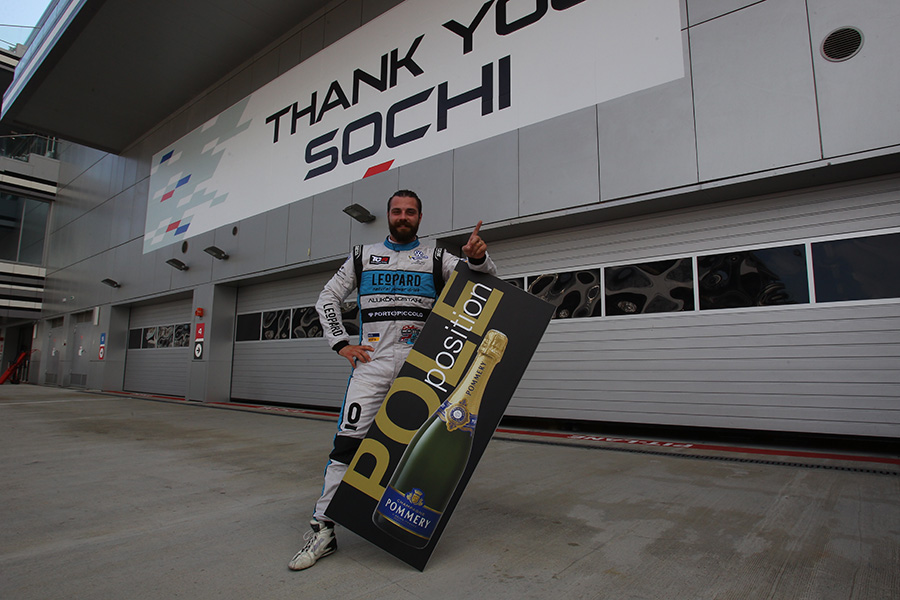 In a torrid afternoon on the shores of the Black Sea, reigning TCR champion Stefano Comini took his first pole of the season, which was also the first one for a Volkswagen Golf car and for Leopard Racing. The Luxemburger team placed his other car in third with Jean-Karl Vernay. Sandwiched in-between the two turquois Golf cars was Pepe Oriola, with the Team Craft-Bamboo Lukoil SEAT, only 141 thousandths behind the poleman and a bit frustrated after having dominated the two free practice sessions and Qualifying 1. The Spaniard saw his best time in Q2 disallowed, for exceeding track limits, although this did not affect the final ranking.
It was a very close fight, with the first eight cars within a second, despite the length of the Sochi Autodrom. Gianni Morbidelli was fourth at the wheel of the WestCoast Honda Civic, ahead of the Mulsanne Racing Alfa Romeo Giulietta of Petr Fulín. The Czech rounded in Q2 a day that saw him always in the top positions and confirmed the progress made by the Italian car.
On their home track, Russian drivers lived a somehow difficult day, with Mikhail Grachev qualifying seventh and Sergey Afanasiev 11th. The two other locals present in the Russian event, Ildar Rakhmatullin (WestCoast Honda Civic) and Vladimir Sheshenin (Liqui Moly Volkswagen Golf) did not pass the Q1 cut, together with Michela Cerruti who complained about severe understeer.
The first row on the reverse grid for Race 2 will be filled by B3 Racing Team Hungary’s Attila Tassi (on pole) and Mat’o Homola.
The first race will start tomorrow at 12:35 local time, over a distance of 11 laps.

Q1: Oriola fastest, Fulín impresses
Pepe Oriola continued in topping the sessions as he was the fastest in Q1 with a lap of 2:21.734. Just like in the second Practice, Stefano Comini was his closest competitor, only one tenth behind (2:21.876), while Jean-Karl Vernay ranked in third (2:22.206).
Petr Fulín provided the biggest surprise, posting the fourth fastest lap in the dying moments (2:22.282), the best results so far for the Romeo Ferraris-built Alfa Romeo Giulietta.
The two Honda Civic cars of Gianni Morbidelli and Mikhail Grachev qualified in seventh and eighth, behind Dušan Borković and James Nash.
The following drivers made the cut for Q2: Oriola, Comini, Vernay, Fulín, Borković, Nash, Morbidelli, Grachev, Afanasyev, Homola, Tassi and Kajaia.

Q2: Comini claims first pole for Volkswagen
Stefano Comini claimed pole position with the time of 2:21.130 on his first lap out of the pits. Nobody was able to improve and only Pepe Oriola got close to it; the Spaniard’s best lap (2:21.160) was disallowed by the Stewards because he trespassed the track limits, but his second best (2:21.271) gave him a front row position on the grid for Race 1.
Jean-Karl Vernay (2:21.434) and Gianni Morbidelli (2:21.699) qualified in third and fourth respectively, followed by an even more impressive Petr Fulín (2:21.954) who placed his Giulietta in fifth.