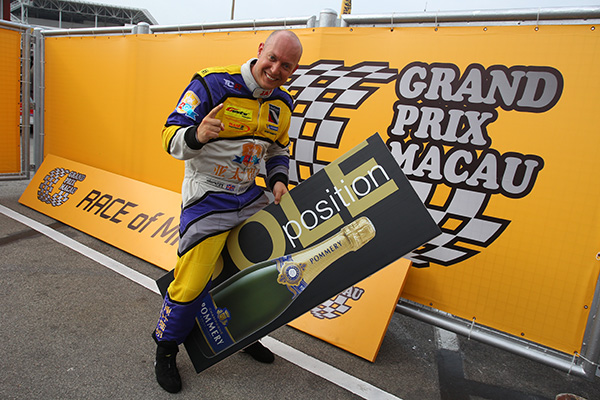 It was an early morning call for everybody at Macau for an exciting and relatively incident-free qualifying session, which had a clear master: Rob Huff. The British star confirmed his ‘Macau master’ status by topping the session and clinching the pole with an astonishing lap of 2.31.522.
Sharing the first row with Huff will be his protégé and teammate at WestCoast Racing Kevin Gleason, who made an impressive debut on the Guia circuit. Title contenders are right behind in the grid, in a somehow unexpected order: despite being a Macau rookie, Stefano Comini managed to beat Jordi Gené and Pepe Oriola for P3. The Swiss also extended his lead in the championship on Oriola to 4 points. Gianni Morbidelli completed the top 6 despite a spin in Q2 that prompted a red flag. Also impressive, Jordi Oriola (on one of the Target Competition SEAT cars) took 7th, ahead of Afanasyev, Belicchi and Rodolfo Ávila, the best of the TCR Asia drivers. Completed the top 12 Lorenzo Veglia, on the sole VW Golf making it to Q2, and Francisco Mora.
27 cars took part in the qualifying session; after the withdrawals of Rafaël Galiana’s SEAT and Alain Menu’s Subaru, the field missed Dan Wells’ Opel that suffered from water pressure problems in yesterday’s free practice.
The first of the two ten-lap races starts Sunday at 10.05 (03.05 CET), followed by the second race at 11.20 (04.20 CET). They will be both streamed live on the internet.

Qualifying 1: Gleason beats Huff
For the first time so far in the event Rob Huff was not the fastest of the field. Hiw WestCoast Racing teammate and protégé Kevin Gleason was able to beat him in the first leg of the Qualifying session.
Gené was the first one to top the time sheet with a lap of 2:37.342 that was soon improved by Pepe Oriola’s 2:35.478. A few minutes afterwards Huff set a new fastest lap of 2:34.977. Eventually Gleason beat his teammate clocking a lap of 2:34.536 that was not to be beaten.
The session was disrupted once by the red flag when Sunny Wong’s Honda spun and was hit by Frank Yu’s SEAT. When qualifying resumed for the final seven minutes there were no improvements.
Other incidents involved Samson Chan and Johnson Huang (both spun) and Francisco Mora who hit a wall. Nash missed the session as his Ford stopped on the track on his first lap out of the pits with suspected transmission problems.
The following drivers advanced to Q2: Gleason, Huff, J. Oriola, P. Oriola, Comini, Morbidelli, Afanasyev, Gené, Belicchi, Ávila, Mora and Veglia.

Qualifying 2: Huff annihilated the rest of the field
With a stunning lap of 2:32.172 Rob Huff annihilated the rest of the field and won pole position, inflicting a gap of 1.6 seconds to Gleason (2:33.153).
Comini clocked a lap of 2:33.498 that placed him third and was worth three precious points for the championship, with Pepe Oriola finishing fifth (2:33.619) and collecting only one point. Gené qualified in fourth with a time of 2:33.528 and Morbidelli in sixth (2:34.665).
This leg too was disrupted by the red flag, when Morbidelli spun and blocked the track.