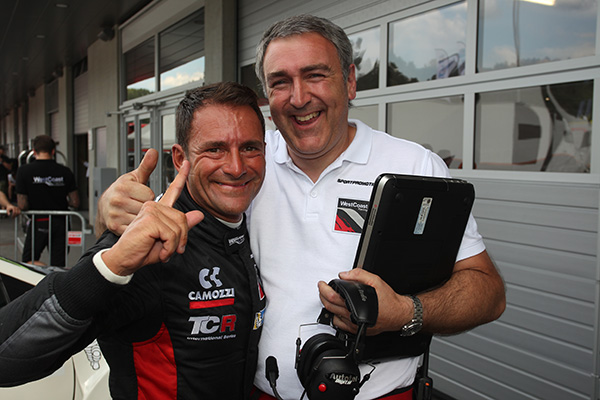 Gianni Morbidelli and Kevin Gleason emerged as the fastest drivers in today’s Qualifying session at the Red Bull Ring.
The Italian was the only competitor able to break the 1:40 mark; his pole position time of 1:39.798 inflicted a six-tenth gap to his own WestCoast Racing teammate, Gleason. This was Morbidelli’s third pole in the current season so far.
The 17-year old Hungarian Dániel Nagy created the biggest surprise of the day. On his first appearance in an international event, Nagy qualified his Zengö Motorsport SEAT León in third position just behind the two Honda Civic cars. Nagy even managed to top the SEAT patrol, beating a bunch of more experienced drivers.
Stefano Comini – the current championship leader – claimed fourth position, ahead of Sergey Afanasyev and Pepe Oriola.
After making wonders in this morning’s Free Practice sessions, the two Volkswagen Golf cars were not as impressive in Qualifying. Pol Rosell and Mikhail Grachev posted the tenth and ninth fastest laps respectively, meaning that they will share the front row on the top-ten reverse grid for tomorrow’s Race 2.
Igor Skuz qualified 11th, however he will be demoted to 14th on the grid for Race 1 as a consequence of a penalty he received for causing an incident with Bas Schouten during the second race at the Salzburgring.
Sunday’s races will go green at 8.25 and 11.40 local time, with a distance of 14 laps each.

Qualifying 1: Comini fastest from Belicchi and Morbidelli
Target Competition teammates Stefano Comini and Andrea Belicchi posted the fastest time in the first part of the Qualifying, Comini set a provisional fastest lap of 1:41.226 that Belicchi improved to 1:41.064. Eventually Comini responded with a lap of 1:40.798 that was not to be beaten.
Gianni Morbidelli placed his Honda Civic in third position, only 14 thousandths of a second off Belicchi’s time. Milkhail Grachev continued to impress at the wheel of the new Volkswagen Golf, setting the fourth fastest time of 1:41.202.
Diego Romanini was only able to complete a bunch of laps before his Proteam Racing Ford Focus stopped along the track due to a technical failure.
The following drivers advanced to Q2: Comini, Belicchi, Morbidelli, Grachev, Gené, Rosell, Gleason, Afanasyev, Oriola, Skuz, Veglia and Nagy.

Qualifying 2: Morbidelli on pole, Nagy claims third place
Belicchi (1:41.619) and Oriola (1:40.796) set the early pace, but soon Morbidelli annihilated the field with two tremendous laps of 1:40.210 and 1:39.798.
In the dying moments of the session Gleason (1:40.335) secured the full front row on the grid for tomorrow’s Race 1 to WestCoast Racing, while Hungarian youngster Dániel Nagy qualified in an impressive third position.
The two Volkswagen Golf cars of Pol Rosell and Mikhail Grachev qualified in tenth and ninth respectively, and won the front row on the grid for Race 2.