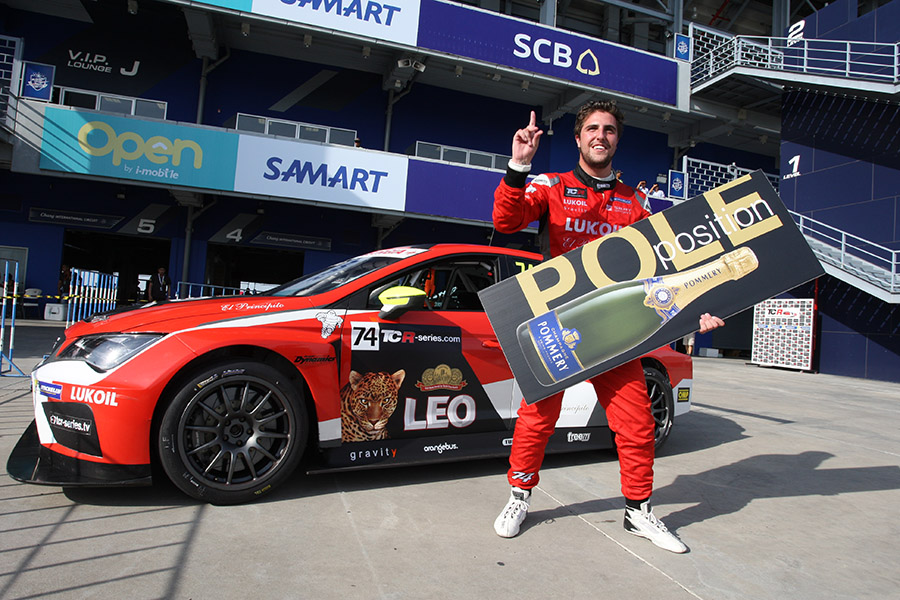 In the closest Qualifying from the beginning of the season Pepe Oriola claimed his first pole position of the year beating Gianni Morbidelli by only one thousandth of a second.
It was also a very rewarding recognition for the Craft-Bamboo Lukoil team that had worked very hard since yesterday to rebuild James Nash’s car after the shunt in testing and to solve a technical issue on Sergey Afanasyev’s. On top of this, the five points awarded for the pole position enabled Oriola to re-take the championship lead by two points ahead of Stefano Comini.
The Qualifying results proved that competition is very close on the track – with the six fastest drivers in Q2 covered by three tenths. Meaning that two exciting races should be expected for tomorrow.
There will be an all-Russian front row on the reverse grid for Race 2, with Mikhail Grachev on pole and Afanasyev alongside him.
The first race will start tomorrow at 12:30 local time (7:25am in Central Europe), over a distance of 14 laps.

Q1: Morbidelli and Comini are very close
Gianni Morbidelli set the pace from the beginning with a provisional fastest time of 1:44.281 that he improved on the following lap to 1:44.109; a mark that was not to be beaten. Stefano Comini posted the second fastest lap of 1:44.180 in the final moments, demoting James Nash (1:44.340) and Pepe Oriola (1:44.393) to third and fourth.
It was an extremely close Q1, with the first 13 drivers covered only by six tenths of a second. Kantadhee Kusiri was the only Thai driver to advance to Q2 (8th fastest – 1:44.488), while Petr Fulín provided the final thrill by posting the 10th fastest lap (1:44.532) and kicking Davit Kajaia (whose car suffered from a broken drive-shaft) off the top-twelve in the process. Kajaia’s teammate Munkong Sathienthirakul missed the whole session due to a gearbox failure.
The following drivers made the cut for Q2: Morbidelli, Comini, Nash, Oriola, Borković, Vernay, Homola, Kusiri, Grachev, Fulín, Tassi and Afanasyev.

Q2: Oriola on pole for the first time
Pepe Oriola won his first pole of the season with a perfect lap of 1:43.634 that was only one thousandths of a second faster than Gianni Morbidelli’s 1:43.635.
The first spell at the pole was from Stefano Comini (1:43.865), but the reigning champion was immediately demoted by Morbidelli (1:43.834) and the later was then beaten by Jean-Karl Vernay (1:43.767).
On his second attempt, Morbidelli jumped on top again with a lap of 1:44.733, but Oriola managed to go faster (1:44.634) and Morbidelli’s last lap (1:44.635) was only 0.001 seconds slower. Kantadhee Kusiri continued in his impressive effort and qualified in eighth, while Petr Fulín could not post any lap time due to an electrical issue.