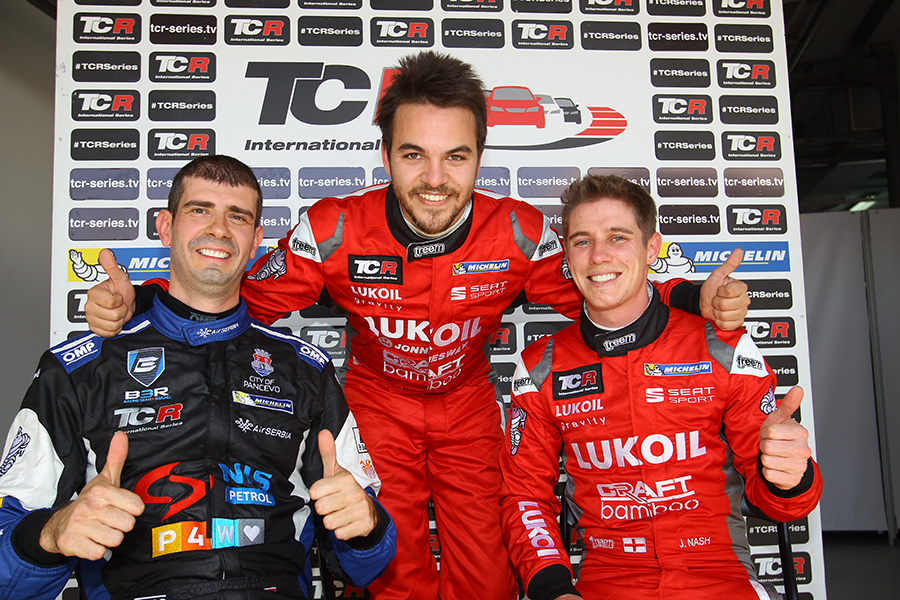 Quotes after the Qualifying session in Bahrain

Sergey Afanasyev (pole position Race 1): “It’s a very strange feeling, because I wasn’t even aware of the result, as the radio was working on and off. I had a good pace but was certainly not under the impression that it could mean pole position! It’s great for the team, for LUKOIL and for me, and it means we worked well. It was difficult to make any prediction, because we had little time for practice yesterday and most of us do not know the track. Real practice started today with qualifying and, of course, I am very happy.”

Dusan Borkovic (2nd fastest): “It’s a good result, of course, especially taking into consideration that I still don’t know the car too well, the track is new and mostly, I have to acquainted to the tyres. I was fastest in Q1, but couldn’t repeat that in Q2. I did a couple of mistakes and then the tyres wore down. Still, it is a very good result for a first qualifying. I’ll try to keep cool in the races and get as many points as possible, it’s only the start of a very long championship…”

James Nash (3rd fastest): “I’m very happy, it’s two years I haven’t been racing in touring cars, and need to readjust a bit. The car feels great, and qualifying was about who would do the fewest mistakes, given that nobody has had the opportunity to test a lot. For the races, we’ll see, the championship is about points, so it’s important to finish and take points.”

Gianni Morbidelli (4th fastest): “We did all we could. This was the first time we could see where everybody stands. The SEAT cars are ahead, it just means we have to improve and work to close the gap.”

Jean-Karl Vernay (9th fastest): “I’m relatively satisfied, being this the first qualifying I do on a front-wheel drive car. The gaps are quite reduced, and I think that without a little brake issue, we could have been 2-3 tenths faster. I did better than my team-mate, who is the reigning champion, so that’s not too bad. Now, the important is to cope well with the starts.”

Jordi Oriola (12th fastest): “The good news is that for the first time this weekend we had trouble-free sessions, both Andrea (Belicchi) and I, and that we could complete the sessions. I was a little bit faster than him, so I guess it’s OK. The real work starts now.”