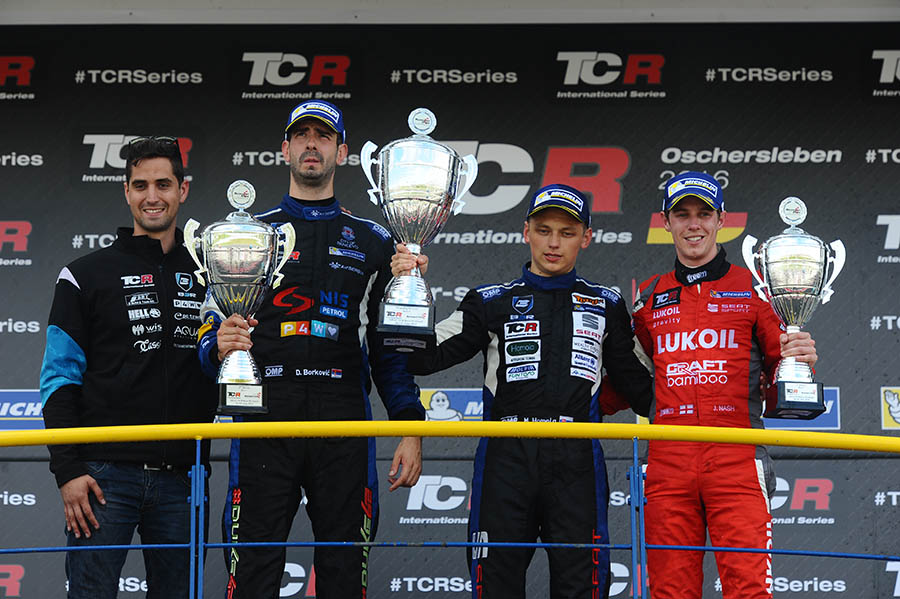 Quotes from the podium finishers at Oschersleben

Mat'o Homola (winner Race 1): "I got this first win I was looking for so hard, and I feel very happy about it. It's a dream come true after seven years in touring car racing. I chose to do the TCR because it is an international series, and I think it was the right choice. The race was quite tough, as it was very wet in some portions of the track and conditions kept changing. On top, there were two safety car periods, which is always stressful, but I managed to control everything. Now I am also well positioned in the championship but things are too tight to make any prediction, I'll take them step by step."

Pepe Oriola (winner Race 2): "After a very bad weekend at Salzburgring because of technical problems, it is nice to be spared by bad luck. Still, Race 1 was quite eventful, as I was involved in two race incidents and even touched the barriers. Luckily, I could finish the race and damage was only cosmetic. In Race 2, I could avoid trouble at the start and passed Kajaia after a few laps. Then everything went fine and I focused mostly on saving my tyres in the closing laps. It's nice to be back in the lead of the standings, although the title race is still very long. I'm on equal points with James, he is very consistent and being both in the same team, we share all the data, so it's going to be a close fight, and I am sure that Morbidelli and Comini will also be part of it."

Dušan Borković (second in both races): "Two seconds is a very good result, and most of all, it means I am again able to finish races! I really thought I could win Race 1. I took the lead and was trying to build a gap, but unfortunately I did a mistake in the rain, going wide and losing positions. I was able to charge back, although there was some more sliding, and Race 2 had a relatively similar scenario. I'm still wondering how I survived all that, but the good news is that we are back on the podium and that this time there isn't additional work for the mechanics."

James Nash (third in both races): "It was a positive weekend, with two good races, and it's nice to be on equal points in the standings with Pepe, although he has more wins than I do. That's what I need to do, try to win more often, but today, given the conditions, I really went for the points, trying to avoid overdoing and doing mistakes."