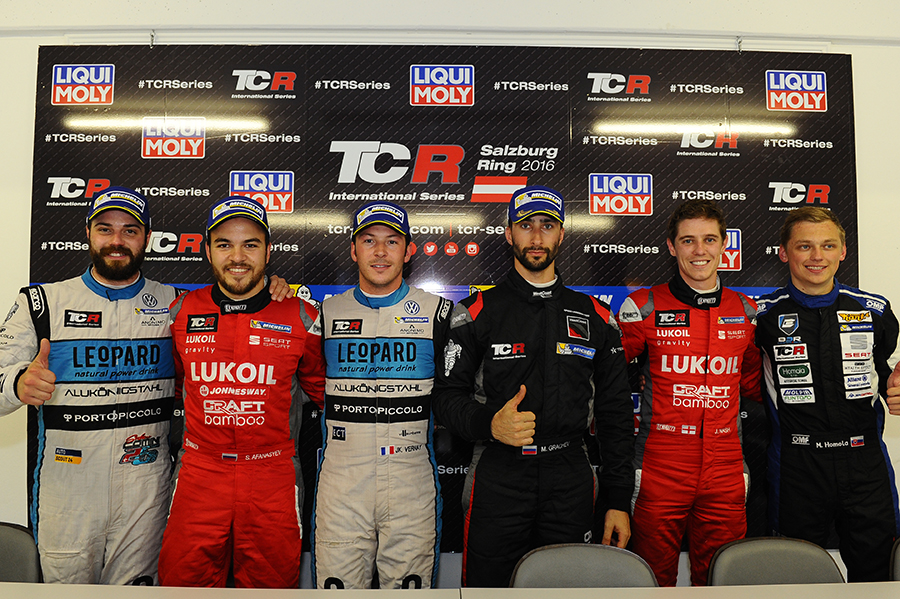 Quotes from the podium finishers at Salzburgring

Mikhail Grachev (winner Race 1): “It was really unexpected for me to win in Imola, but here it was even more unexpected because I was P9 at the start. My role was to save the car and just to finish so I could start Race 2 from the front row. I made a good start and I was lucky to avoid the incident with the other cars flying around me. Without Pepe Oriola’s technical problems it would have been impossible for me to win because he was in front and I had no real opportunity to overtake. We had a compromise set-up in case of a wet race and it was a little bit softer than it needed to be, but it meant I had a better exit from some of the corners, which meant I could be fast on the straights.”

Jean-Karl Vernay (winner Race 2): “We woke up this morning and Stefano (Comini) said it was going to rain! Race 2 was crazy but I made a good start and I was able to get a good gap. After the safety car, I was able to make a good gap again. I then made a little mistake and Sergei (Afanasyev) was able to pass me, but I re-passed him on the back straight. I think it was a perfect result for the points; we weren’t thinking about that when we arrived because it was dry. Thanks to the team for their hard work this weekend – I just hope I don’t have too much weight next time.”

James Nash (2nd in Race 1): “Qualifying was not how we wanted to start the weekend, but championships come from your bad weekends. We managed to push our way through the accident at the first corner, which meant we were in the hunt. The incident with Borkovićwas marginal as I couldn’t see him alongside me and I was committed. We had the smallest of touches, which sent him off.”

Sergey Afanasyev (2nd in Race 2): “Most of this race was done in the pits so my thanks to the guys who were working on my car. There was no other solution except to end parc fermé and to start from the back of the grid. In the first race, I planned to keep four wheels on the track, but only managed to do it with three! In the second race, my aim was to score points after the technical issues in Imola. The team did all the hard work – all I did was keep four wheels on the track.”

Mat’o Homola (3rd in Race 1): “Qualifying was really bad because I had a crash when I was in P1 – thanks to the team because they repaired my car really fast. The start of Race 1 was disappointing because of the Turn 1 accident, but I had a really good race pace and I was able to recover and fight for the podium positions. It was really nice for me”

Stefano Comini (3rd in Race 2): “Before the weekend, I sent Pepe Oriola an SMS and said I was looking forward to passing him in the Championship! I am really disappointed with the Golf because if you look at the first race we had no chance to battle on the dry track. I was the first one to put on wet tyres on the grid for Race 2 and it was the right choice – thanks to Leopard Racing, as this result put me back on top of the classification.”