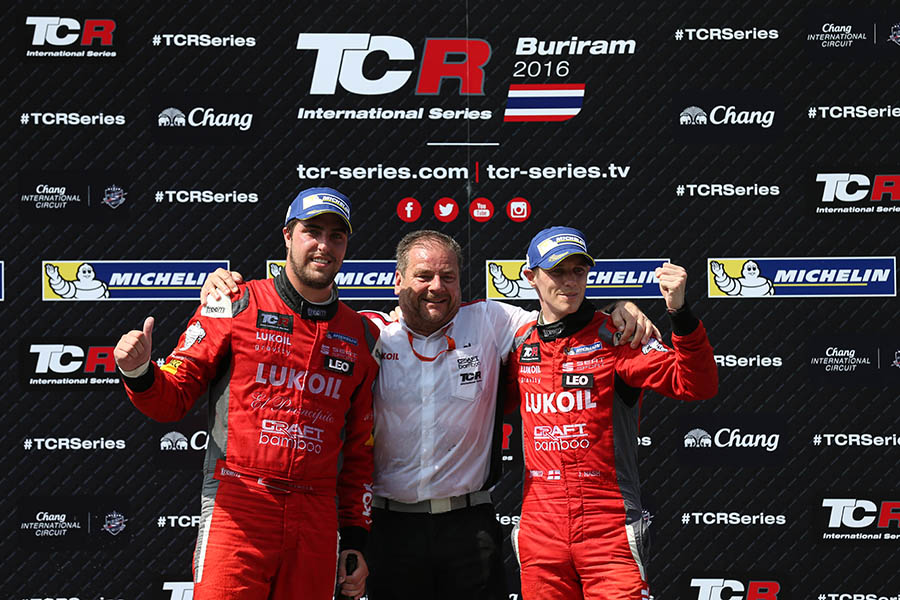 Quotes from the podium finishers in both races

James Nash (winner R2 and 2nd in R1: “A very good weekend for me, especially after the big accident on Thursday. In Race 1, not much happened. I had a good start, passing both Comini and Vernay, and when Morbidelli went a little bit wide, I could take second. This is a circuit where you really have to avoid going wide, as there is much dirt out of the track. It’s a track that suits me very well, and Race 2 went very smoothly. I could pass Grachev, take the lead and keep it. I think we were clever throughout the weekend and keep raising our game. I am now leading the championship, but I don’t want to think about that until Macau.”

Pepe Oriola (winner Race 1): “It was a great weekend for the Team Craft-Bamboo Lukoil and for our title bids, so I am very happy. In Race 1, I took the best start of the season and could stay in front of Gianni then it was a matter of managing the situation and the rise of temperatures. In Race 2, I had a normal start in the middle of the pack and a contact with Tassi at first corner. Then, Gianni had his accident and I had to go wide into the dirt to avoid him. Something must have punctured my front left tyre because at the following braking, the tyre blew together with body parts. Luckily, the safety-car was out and I did not lose much time, but finished 11th and took no points. Still, leaving Thailand with 30 points is very good for me.”

Mikhail Grachev (2nd in Race 2): “Nothing went as planned, as I was hit from the back during the first lap in Race 1 and got the car damaged. I had to pit for repairs and the guys worked well. The car was fit enough for Race 2 but I had not enough pace to keep the advantage of pole position. It was useless to try keeping James at bay and preferred to take no risk. Under the circumstances, finishing second is almost like a win.”

Gianni Morbidelli (3rd in Race 1): “Race 1 went well, but there was no way to keep the pace of the Bamboo cars. I lost second to Nash because a little mistake, I hit a kerb and went wide. My biggest concern was the water temperature and I was trying to get fresh air with different lines, but the temperature kept going higher and that was making me nervous. Things went worse in Race 2, as I lost completely the car in turn 8 during the first lap. I have no idea of what happened, maybe something got bent in a small earlier contact, the car just went into the barriers without any notice or anything I could do. I am sorry for the mechanics, as they will have some work to do…”

Dušan Borković (3rd in Race 2): “This is the first event of the year where we definitely did not have the pace of the front-runners, and still, we got a podium finish… In Race 1, my tyres were immediately killed after a couple of contacts in lap 1. Race 2 was clearly livelier, with a great fight with quite a few other guys. I enjoyed it very much and I think it was a great show for anyone watching…”