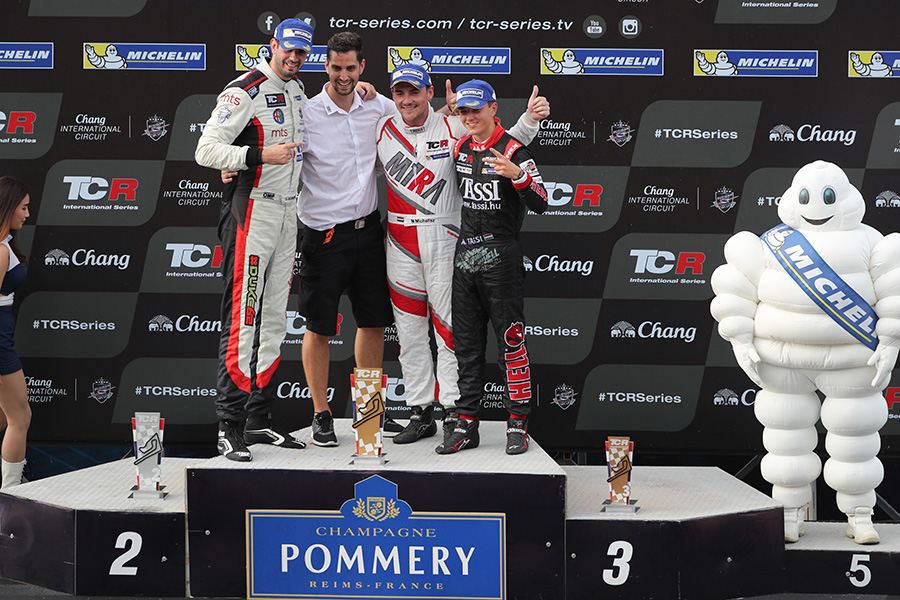 Norbert Michelisz (1st in Race 1): “I’m absolutely over the moon! Before the weekend, we didn’t really expect to win races to be honest. The Civic is carrying a lot of weight but we did some great work and the team found a good balance. I’m really happy for Attila because he scored the most points and I’m also happy for Giacomo, because I think he can be proud of himself. We knew what we had to do in Qualifying and both races went well. I had luck because Homola suffered a puncture. I could see that he was pushing and so I followed him to increase the pressure, but I could see in the mirror that Attila might need some help so I dropped back. Oriola was too close and so it didn’t work as well as it might, but at the end it is how it is and so I’m happy for the team.”

Dušan Borković (2nd): “I was really disappointed after Qualifying because of what happened. To start from the middle of the grid is always difficult but I had an okay start and I was able to attack. On some circuits the car is good and in others we need to improve it, particularly in slow and medium corners, but the team did a really good job this weekend. The brakes were good in Race 1 and I decided not to change them, but I started locking up in Race 2 and so I had to be careful. Luckily the Alfa is a little bit faster on the straights and so I could keep Nash and Huff behind me. I’m not really focusing on the championship, but I know I’m not far behind Oriola now.”

Attila Tassi (3rd): “This weekend couldn’t have been any better. It all came together in Race 1 and we had a good first lap. I overtook Vernay after the start and went around the outside of Nash at Turn 3. After that, it was tough as I fought with Vernay for 14 laps and had to manage my tyres. Norbi tried to help me once, but Oriola and Vernay were right behind me and it was a big risk. I lost two positions and then Borković came with the Alfa. P1 and P3 for M1RA was really good for the drivers’ and teams’ standings. In Race 2, I had another good start and then Norbi was behind me so it was a bit safer than Race 1. There was a good fight with Comini on the first lap and I always enjoy fighting with him, it was a lot of fun.”