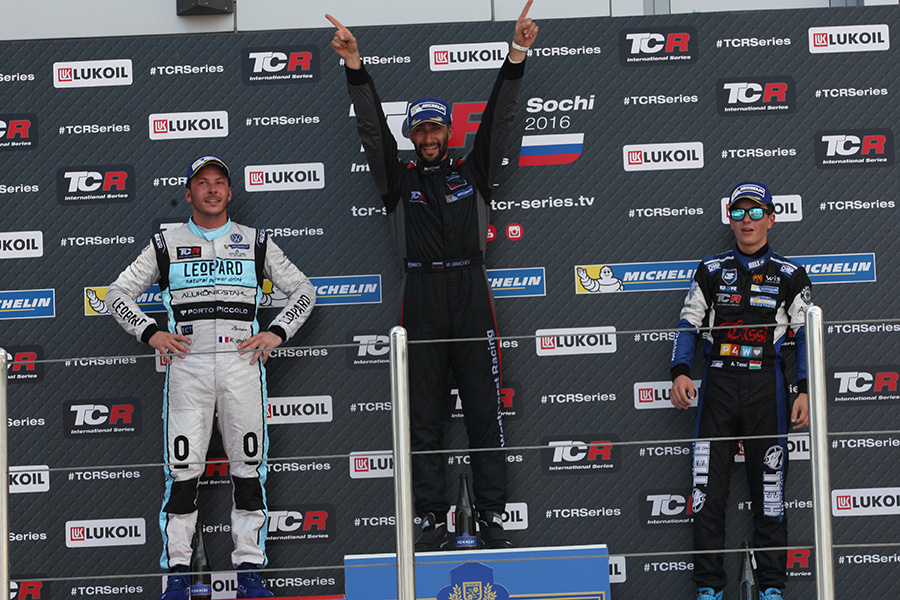 Quotes from the Race 2 podium finishers

Mikhail Grachev (winner): “I am really happy of this win, the third of the season and at home! I really want to thank WestCoast Racing because they did a fantastic job. I had a problem with my front tyres in Race 1, their temperature was too high and there was no grip. In-between the two races, the guys worked to find a solution, despite the very short turn-around time, and they managed to solve the problem. The car was perfect. I could take a very good start, build some gap and stay in front. It wasn’t easy, there was a lot of fighting behind me and when I saw Vernay emerging, I knew I was going to have some pressure on me, but eventually it worked. I think starting well in both races was key today, I am really happy about my starts since I drive the Civic, now I really want to improve my qualifying, so that I can be in a better position on the grids.”

Jean-Karl Vernay (second): “It has been a tough weekend for me: a new track, so much heat and a flu, really not easy. But I am happy I could do well and I liked the Sochi Autodrom a lot. Unfortunately, my Race 1 was spoiled when Nash hit me and I dropped from 4th to 10th, climbing back a few positions afterwards. Race 2 was much better, I won a couple of duels and finished second. By then, my tyres were not in a good situation and I was really sick, so I just tried to stay where I was.”

Attila Tassi (third): “It is very nice to be on the podium for the first time, but I really want to go for more results like this and to be on a higher spot soon. I think I made a good start in Race 2 and that I did a nice race having to defend myself from the attacks of much more experienced drivers. I did a little mistake at some point and Vernay passed me, but I managed to keep Morbidelli at bay until he had a problem. In the last lap, I just tried to stay focused and get on the podium. I really want to thank the B3 Racing Team for all their support, after a difficult start of the season, and my parents for allowing me to do what I like.”