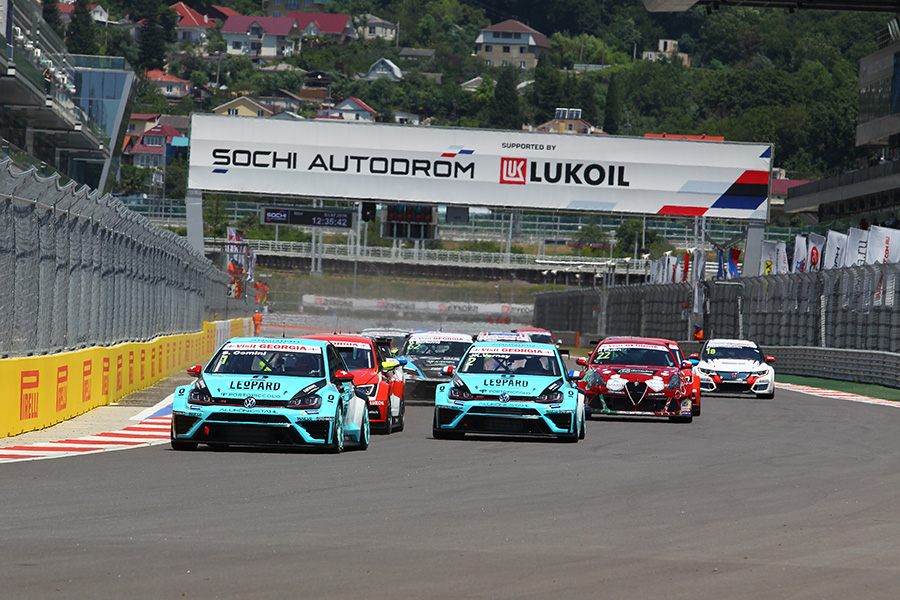 Stefano Comini took his second win of the season at Sochi Autodrom. Starting from the pole, the Swiss was able to build a good advantage in the early laps, keeping the Leopard Racing Volkswagen Golf Gti well ahead all rivals up to the chequered flag. Race 1 on the Russian track was characterized by extremely warm weather. Pepe Oriola finished second after a short duel with Gianni Morbidelli, who had taken an excellent start. The SEAT of the Spaniard and the Honda of the Italian completed a podium where three different manufacturers were represented.
With this success, Comini moved up to second in the standings, only 9 points behind Oriola and one ahead of James Nash.
The Briton crossed the line fourth, ahead of Dušan Borković, Mikhail Grachev, Jean-Karl Vernay, Petr Fulín and Davit Kajaia, who animated the race with some close battles. The 8th place of Fulín represents the best race result so far for the Romeo Ferraris-built Alfa Romeo Giulietta.
Mat’o Homola took the last point in a race that saw few incidents. The Slovak and team mate Attila Tassi will be on first row for Race 2, which will start at 14:05 local time.

Key facts
Start – Poleman Comini takes a good start from Morbidelli, Oriola and Vernay; Afanasyev stalls the engine and starts from the back
Lap 1 – The four leading cars are followed by Nash, Grachev, Borković and Fulín
Lap 2 – Comini builds a gap, at the pace of one second per; Oriola passes Morbidelli for second.
Lap 3 – Fulín and Kajaia are in a close battle for 7th and swap positions twice; Borković and Grachev are in a similar fight, with the Serbian taking 5th
Lap 4 – Vernay makes contact with Nash and drops to 10th; Sheshenin pits with damage on the front right wheel and body after hitting a pile of tyres
Lap 6 – Comini leads by 4 seconds on Oriola, then Morbidelli, Nash and Borković; Vernay passes Homola for 9th
Lap 7 – Fulín attacks Grachev for 6th, with Kajaia chasing them closely; Afanasyev is given a drive-through for trespassing the track limits
Lap 8 – Vernay passes Kajaia for 8th
Lap 9 – Vernay takes 7th from Fulín
Lap 11 – Comini takes a comfortable win ahead of Oriola, Morbidelli, Nash and Borković