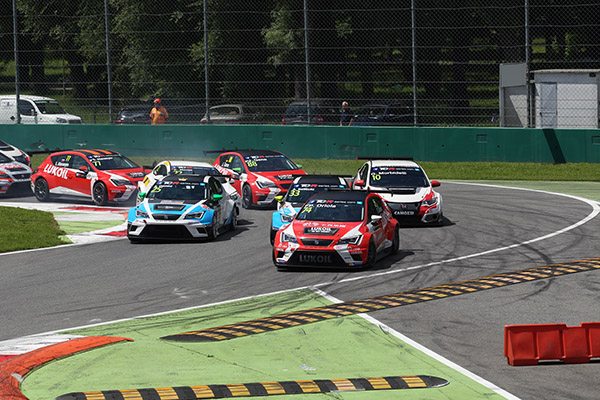 Gianni Morbidelli took the second win of the year for WestCoast Racing and the Honda Civic in a lively Race 1 at Monza that was much closely-fought than expected. The advantage shown by the Civic during free practice and qualifying did not materialize in the race, under a nice sunshine, which forced Morbidelli to the limit to pass Belicchi and Comini before taking the lead from Oriola at mid-race.
The Spaniard finished a close second ahead of Belicchi and Gené, while “warrior Comini” had to retire two laps from the end after running wide at the Lesmo 2 corner. It was not the only spectacular incident, as Grachev, Afanasyev and Nykjær were eliminated in a three-way collision in the closing laps while fighting for eighth position.
It was a race of premieres, with Fernando Monje taking a superb fifth in the Campos Racing Opel Astra’s most solid show so far, while there were point finishes for rookies Zsolt Szabó and Antonio D’Amico. Last but not least, Tom Boardman managed to finish the race with the Ford Focus ST, giving the first point to Proteam Racing’s car.

Key moments
Grid – All cars are on the grid, but Davide Roda’s SEAT that could not be repaired after yesterday’s roll; Gleason starts from the very back after the incident in qualifying
Start – Not a great start from Morbidelli and Comini, with Oriola sneaking between them, which creates some rubbing at first chicane; excellent kick-off from Monje and Belicchi
Lap 1 – Contact between Comini and Afanasyev at the first chicane, Oriola leads ahead of Belicchi, Morbidelli, Comini, Gené, Monje and Grachev
Lap 2 – Comini passes Morbidelli on the outside of first chicane and is third
Lap 3 – Comini again in action at first chicane, this time passing Belicchi for second
Lap 4 – Morbidelli outpowers Belicchi on the straight and is third; Veglia passes Grachev for 7thand soon after also Gleason is through; the first three are nose to tail at the Parabolica, with Comini trying the outside line, but losing position to Morbidelli
Lap 5 – Morbidelli almost passes Oriola on the straight at the beginning of the lap but the Spaniard keeps the advantage; Gleason takes seventh from Veglia
Lap 6 – At the end of the lap, Morbidelli manages to take the lead using the slipstream
Lap 7 – Comini cuts first chicane after trying to pass Oriola.
Lap 8 – Gleason passes Monje for sixth at the end of the straight; Skuz stops in pits with brakes problems; Monje repasses Gleason, while Veglia goes straight at the Roggia
Lap 9 – Big fight between Oriola and Comini for second, but the Swiss is kept at bay and then goes wide at Lesmo 2, losing rear bodywork; he stops on the track soon after
Lap 10 – Grachev touches Afanasyev at the Roggia and both hit the barriers after taking Nykjær along. Race over for the three
Lap 11 – Morbidelli wins ahead of Oriola, Belicchi, Gené, Monje, Gleason and Veglia