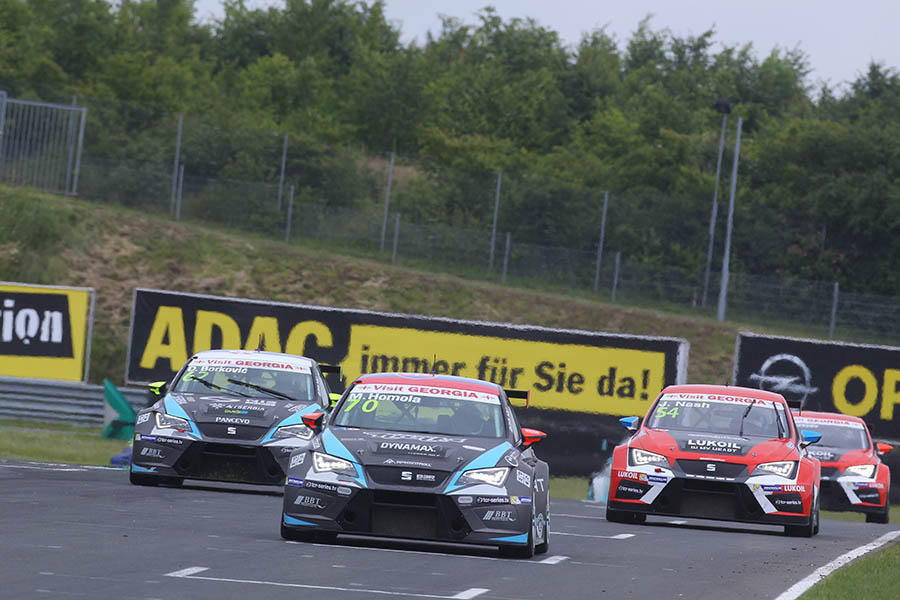 After dominating yesterday’s Qualifying, B3 Racing Team’s Dušan Borković and Mat’o Homola swapped positions in the first race and gave B3 Racing Team its first victory in the TCR International Series.
Although he was able to exploit his pole position, Borković made a couple of mistake that dropped him behind his teammate. Homola had a spotless race and managed to keep his competitors at bay, with James Nash, Sergey Afanasyev and Antti Buri crossing the line behind the B3 Racing duo.
In a race that was plenty of incidents and safety car interventions, Gianni Morbidelli and Pepe Oriola managed to survive, salvaging a seventh and tenth positions that might prove crucial in the title fight, while Stefano Comini was forced to retire.
The two Mulsanne Racing’s Alfa Romeo Giulietta cars were brilliantly running in seventh (Michela Cerruti) and eighth (Petr Fulín) when they were both stopped by mechanical failures in the final laps.
With these results, Homola is the new championship leader, Nash is second, one point behind; Oriola and Comini are on equal points, with a gap of 11 from the leader.
The second race will kick off at 14:15 local time.

Key facts
Start – Borković takes the lead from Nash and Homola
Lap 1 - there is commotion at Turn 1 with a collision involving Grachev, Kajaia, Oriola, Comini and Afanasyev
Lap 2 – Homola and Buri overtake Nash who drops to fourth; Morbidelli goes wide and drops at the back
Lap 3 – Tassi spins off at Turn 2 while trying to overtake Comini; Borkovićmakes a mistake and drops to third
Lap 4 – the safety car is deployed to recover Tassi’s car
Lap 6 – the race resumes, Homola leads from Buri, Borković, Nash, Vernay and Comini
Lap 7 – Comini passes Vernay for fifth; Oriola overtakes Afanasyev for seventh
Lap 8 – Morbidelli and Sheehan make contact, the American spins; Borković and Nash pass Buri who drops from second to fourth; the rain comes
Lap 9 – Borkovićmakes a mistake and drops behind Nash and Buri
Lap 10 - Borkovićretakes third from Buri who is fighting with Comini
Lap 11 – Comini missed the braking point at T1 and drops to sixth behind Oriola; Oriola and Buri make contact, the former crashes into the tyre wall
Lap 12 – Comini stops in the run-off area at T1; Grachev spins and hits Comini car; the safety car is deployed again
Lap 15 – the race resumes once again; Morbidelli moves up to seventh overtaking Fulín and Cerruti; Fulín pits and retires
Lap 16 – Buri overtakes Vernay for fifth
Lap 17 – Cerruti stops on the track losing the eighth position
Lap 18 – Sheehan makes a mistake and gets stranded onto the grave trap
Lap 19 – Borković overtakes Nash for second; Homola wins from Borković, Nash, Afanasyev, Buri and Vernay