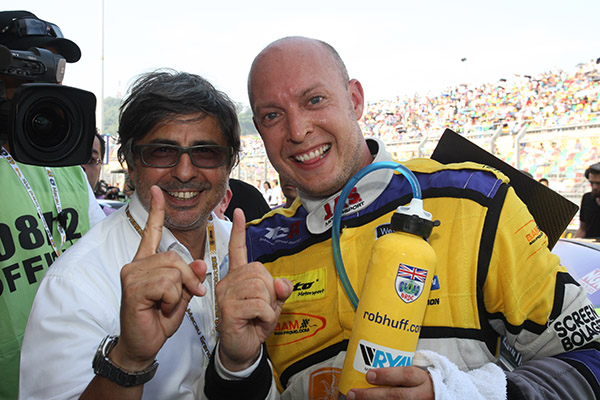 As expected, Rob Huff dominated Race 1 to take his 8th success at Guia Circuit. Driving the WestCoast Racing Honda, the Brit still had a sweating kick-off, as his start from pole position was not great and he only managed to emerge ahead of Jordi Gené and Stefano Comini with a late braking at the Lisboa corner. From there on, Huff had a much quieter morning, with the three title contenders (Gené, Comini and Pepe Oriola) minding their crown affair. The three ran almost bumper-to-bumper for the entire race but positions did not change and the only serious attack from Oriola in the last lap went fruitless. This allowed Comini to exted his lead to 7 points ahead of Race 2, with Gené definitely out of contention. Jordi Oriola took an excellent fifth, after passing the Honda cars of Gianni Morbidelli and Kevin Gleason. Andrea Belicchi was eighth ahead of the VW Golf of Lorenzo Veglia, with Sergey Afanasyev taking the last point.
Rodolfo Ávila finished in 12th place and won the TCR Asia race for Asia Racing Team.
The race was marked by a big accident in the middle of the group during the first lap that involved Francisco Mora, Kenneth Lau and Frank Yu, prompting a red flag and a 3-lap safety-car period. Mora was sent to the hospital for medical checks.

Key moments
Start – Excellent start of Comini and Gené from row 2, who sandwich Huff; the three go abreast all through the straight, with Huff retaking the advantage shortly before the Lisboa bend ahead of Gené, Comini, P. Oriola, Morbidelli and Gleason. It’s drama at the Mandarin bend though, as Mora hits the wall on the outside and spins, Yu brakes in avoidance, Lau hit him and crashes into Mora’s car. The race is red-flagged while Mora is brought to hospital for checks. Ho pits with electrical gremlins.
Lap 4 – The race restarts, with Huff leading from Gené, Comini, P. Oriola, Morbidelli and Gleason.
Lap 5 – The best fight is for 5th place, with Morbidelli holding Gleason, J. Oriola, Afanasyev and Belicchi.
Lap 6 – Huff’s lead is now 2 seconds over the trio Gené, Comini, P. Oriola. Nash, who was 15th,  pits with engine overheating. Great moves by Jordi Oriola, who passes both Gleason and Morbidelli climbing to fifth.
Lap 8 – Attention shifts to the three men fighting for the title, as they are closest as ever. The Golf cars of Veglia and Grachev pass Afanasyen for 9th and 10th.
Lap 10 – P. Oriola makes an attempt to pass Comini at Lisboa, but without success. There is some bumping at Melco, but nothing changes. Comini is third behind Huff and Gené, and ahead of P. Oriola. Afanasyev wins Russian duel with Grachev for 10th.