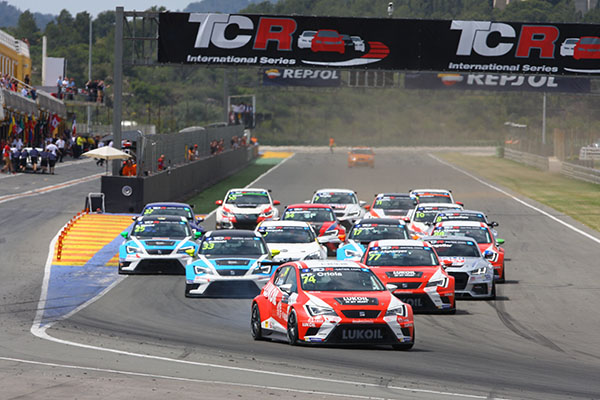 In a warm mid-day Race 1 in Valencia, the Team Craft-Bamboo Lukoil took a resounding success, posting a 1-2-3 with Pepe Oriola, Sergey Afanasiev and Jordi Gené in SEAT’s home soil. This is also the first TCR win for Pepe Oriola, already one of the top-runners in the Asian rounds that opened the season.
The SEAT León cars of the British-Russian team proved their competitiveness since the practice session, but could pull away even more easily thanks a very bad start of Stefano Comini, who partly blocked the field. Behind the podium positions, Andrea Comini took fourth and Mikahil Grachev an excellent fifth with the Liqui Moly Team Engstler Audi TT. Stefano Comini came in sixth, followed by team mate Michel Nykjær. Gianni Morbidelli came in eighth, the first Honda Civic, in a race where the Japanese cars were not at the top. The last two point-scoring positions were for Dutch rookie Bas Schouten and Lorenzo Veglia.
The second race will start at 14.05 local time.

Key moments
Grid – Jordi Oriola did not start with an apparent transmission problem
Start – Perfect kick-off for Oriola, but Comini has a bad start, which disrupts part of the grid, and forces Gené onto the grass on the inside line.
Lap 1 – Oriola leads ahead of Afanasyev, Gené, Belicchi, Grachev, Comini, Nykjær, Cebrián and Engstler who slipped down following a clash with Belicchi
Lap 2 – Comini passes Grachev for fifth, with the three Lukoil cars pulling away
Lap 3 – Engstler pits for repairs
Lap 4 – Grachev repasses Comini in what is the hottest duel at this stage of the race
Lap 6 – Behind the top six, Nykjær leads ahead of Cebrián, Morbidelli, Veglia and Schouten, while Nogués, who was running tenth begins to slow down
Lap 7 – Cypriano passes Nogués for 14th
Lap 9 – Cebrián and Veglia receive warnings for not respecting the track limits
Lap 11 – Belicchi has closed the gap from Gené
Lap 12 – Gené resists well, while there is battle at the back between Veglia and Schouten
Lap 13 – Schouten passes Veglia for 9th
Lap 15 - The Craft-Bamboo Lukoil team claims a wonderful 1-2-3