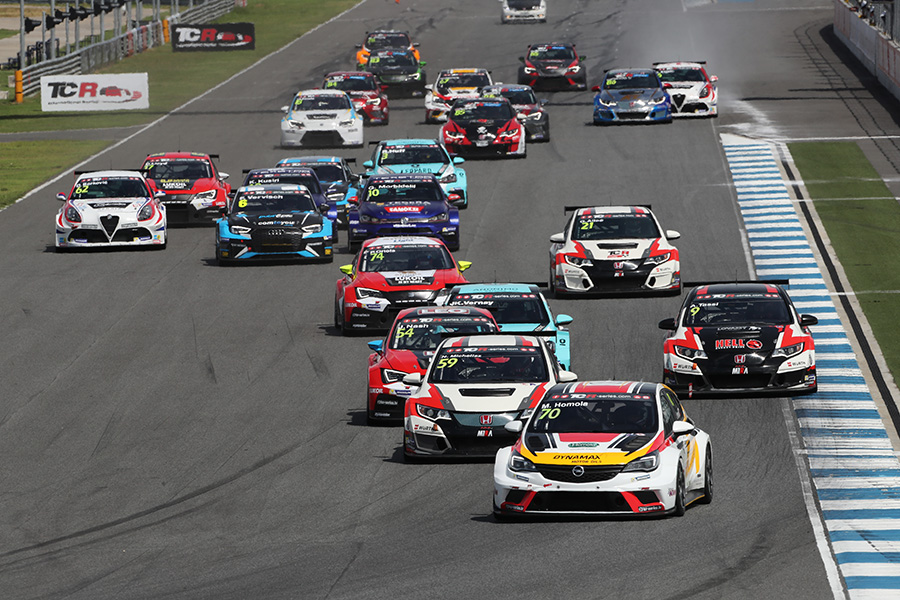 Mat’o Homola was on the verge of claiming his maiden win at the wheel of the DG Sport Compétition Opel Astra when he was forced to retire with a blown front tyre with only two laps to go. This is the second consecutive race in which the young Slovak has lost a victory in the final moments, after he was passed by Gianni Morbidelli on the last lap of Oschersleben’s Race 2.
As a result, Norbert Michelisz – who was not even expected to race in Thailand – gratefully inherited his first victory in the TCR International Series. The Hungarian ace, called in at the last minute to replace the injured Roberto Colciago, was driving with one eye on the rear view mirror to check how his M1RA Racing teammate Attila Tassi was performing while defending himself from the attacks of Jean-Karl Vernay.
Eventually he found himself the winner with Tassi in third, so claiming two of the podium places for the Honda Civic. Second place went to the Alfa Romeo of an ecstatic Dušan Borković who completed a fantastic recovery from 13th on the grid. An even better performance came from his teammate Davit Kajaia, who recovered from 23rd to 8th.
After being so competitive in previous years here at Buriram, Lukoil Craft-Bamboo suffered setbacks as both James Nash and Pepe Oriola retired while they were fighting for the podium positions.
The second race will start at 16:30 local time; Aurélien Paniswill sit on pole with Stefano Comini alongside him. The race will be streamed live at www.tcr-series.com and www.tcr-series.tv.

Key facts
Grid – Panis and Kajaia are at the back of the grid following engine changes
Start – Homola sprints from pole and takes the lead, followed by Michelisz and Nash
Lap 1 – Tassi overtakes Nash for third
Lap 2 – Vernay and Nash swap positions twice, Nash retains third place, Oriola follows them in fifth
Lap 4 – Nash outbrakes himself at T1 and drops to fifth behind Vernay and Oriola; Borković overtakes Altoè for 7th
Lap 5 – Morbidelli overtakes Vervisch for 9th
Lap 6 – Vernay and Oriola are chasing Tassi
Lap 7 – Oriola overtakes Vernay for fourth; Nash retires with a broken driveshaft
Lap 8 – there are contacts in a four way fight for second place, Michelisz is followed by Oriola, Tassi and Vernay; Borković overtakes Vernay for fifth
Lap 9 – Borković overtakes Tassi for fourth
Lap 10 – Tassi is chased by Vernay, Altoè, Morbidelli and Huff; Huff and Morbidelli make contact
Lap 12 – Morbidelli runs wide at T1 and drops to 11th behind Huff, Comini and Kajaia; Lloyd overtakes Morbidelli for 11th; Promsombat hits a pile of tyres and retires while leading TCR Thailand
Lap 13 – Homola retires from the lead with a blown front left tyre ; Michelisz leads from Oriola and Borković
Lap 14 – Oriola stops on the track from second with a gearbox failure; Michelisz wins from Borković; Tassi retains third place despite a contact with Vernay at the last turn; Nuya wins the TCR Thailand race from Lewattanavaragul and Leenutaphong