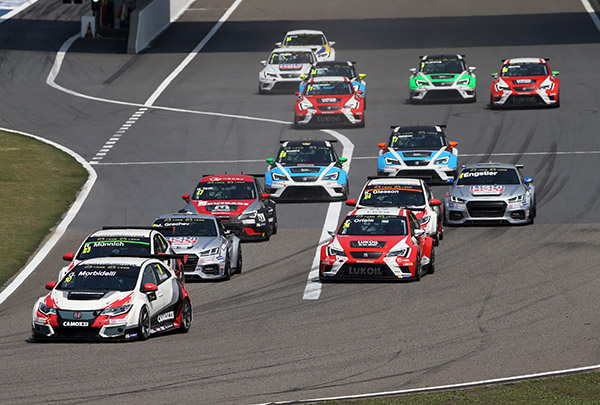 WestCoast Racing took no prisoners in Race 1 at Shanghai, posting a sensational 1-2-3, thanks to the excellent speed of the Honda Civic cars on the long straights of the Chinese circuit.
Gianni Morbidelli added a first TCR win to his long string of successes in international touring cars, leading the race from lights to flag, closely followed by team-mate René Münnich. With this success and the pole position obtained earlier, the Italian is now leading in the Drivers’ standings, by 5 points.
Kevin Gleason came in third, completing the all-Civic podium, but the American had to battle hard to conquer his first TCR podium, swapping positions many times with previous championship leader Stefano Comini, who eventually took fourth and was the first of the SEAT cars. The Gleason vs Comini was not the only exciting duel of the race: Chinese fans could also enjoy close battle for fifth, as Mikhail Grachev’s Audi TT went under attack from Jordi Gené and later, Andrea Belicchi. The Russian, who put on a solid race, managed to keep the Spaniard at bay but was pipped by the Italian in the last corner.
Pepe Oriola had taken a great start and was running second, but was forced to retire at the end of lap 1 after suffering a puncture and body damage following a clash with Münnich.