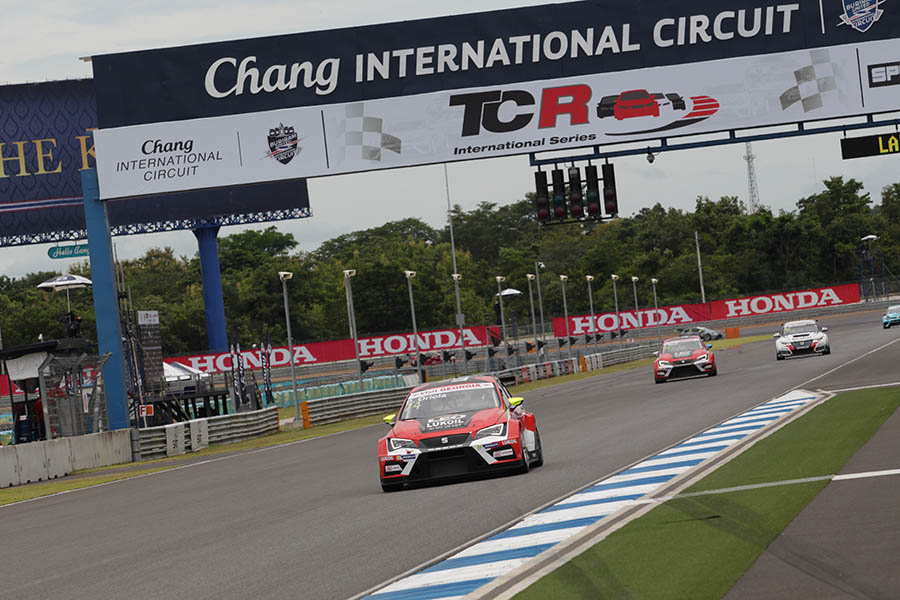 Pepe Oriola claimed a dominant lights-to-flag victory in the first race at the Chang International Circuit, while his teammate James Nash secured a triumphant 1-2 finish for the Team Craft-Bamboo Lukoil.
Gianni Morbidelli finished third after he was forced to hand the second position to Nash halfway through the race.
The Leopard Racing duo of Stefano Comini and Jean-Karl Vernay finished in fourth and fifth after a close fight. Kantadhee Kusiri was classified a brilliant sixth and won the TCR Thailand race; Narasak Ittiritpong (11th overall) and Alexander Mies (13th) filled the other podium positions.
The victory enabled Oriola to stretch his point lead to 15 points ahead of Comini, while Nash is now only three points behind the reigning champion.
The young Spaniard said: “It’s was a great way to start this Sunday. I was very concerned about the start, because I knew the Honda is very fast, but everything went well, I took my best start of the year and had enough margin at the first corner. From then on, it was a matter of managing the situation. The temperatures were rising steadily through the race, but I think Morbidelli had the same problem, as I saw him looking for fresh air and then getting passed by Nash. It’s a great 1-2 for the team and a good result for us towards the championship.”
Race 2 will start at 14:05 local time, with Mikhail Grachev’s on pole in the reverse grid

Key facts
Start – Oriola sprints from the pole and leads from Morbidelli and Nash who takes a good start from the third row
Lap 1 – Comini overtakes Vernay for fourth; Lemvard pits for repairs after a contact
Lap 2 – Ittiritpong, Tassi, Afanasyev and Kajaia are in a close fight for 10th place
Lap 4 – Fulín is chasing Homola who is eighth; the latter slows down and comes back to the pits with a drive shaft problem
Lap 6 – Comini and Vernay have a fight for fourth place
Lap 7 – Nash overtakes Morbidelli for second; Afanasyev overtakes Kajaia for tenth
Lap 8 – Galiana, Bulbon and Supaphongs make contact while fighting for 17th position
Lap 9 – Grachev pits for repairs after a contact
Lap 10 – Ferrara stops on the track with suspected engine problems
Lap 11 – after starting from the back of the grid, Sathienthirakul is chasing Ittiritpong for 11th position
Lap 12 – Grachev re-joins
Lap 13 – Fulín misses the braking point at T3 and crashes while he was eighth
Lap 14 – Oriola wins from Nash, Morbidelli, Comini, Vernay and Kusiri