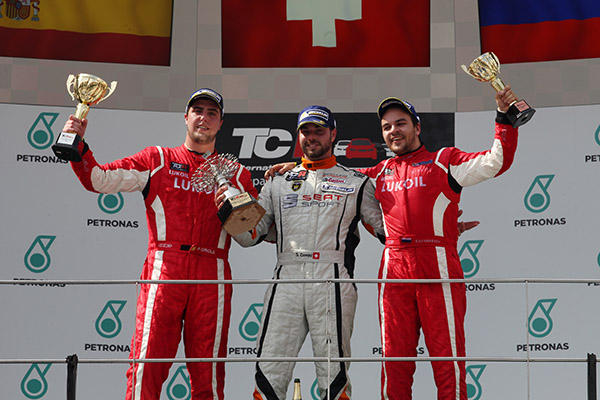 Race 1 – Quotes from the podium finishers

Stefano Comini, first: “It’s incredible to win the very first event of the TCR International Series! A moment I’ll always remember! I feel I have been very lucky in this race: I had a good start but missed the breaking point at turn 1 and had to do some drifting… I recovered well and was able to take the lead, pushing a lot in the first four laps to build a good advantage. The guys behind made my task easier as they were battling fiercely between them!”

Pepe Oriola, second: “I’m happy with second, I couldn’t do better after a somehow poor qualifying, which was a pity following excellent free practice. In the race I was hit a couple of times in the first lap, but then could find the way through and take second. Stefano, though, was too far away and it was too late to try and catch him.”

Sergey Afanasyev, third: “First of all, I have to say I am enjoying this new experience very much and want to congratulate everybody who put together such a nice series. My race was lively and I was involved in a lot of battles. I was worried about how the tyres would behave in the final laps and indeed, I had to struggle a bit, but I am happy to be on the podium in this very first race, especially because the level is very high and I think people behind me were already being tactical about avoiding success ballast…”