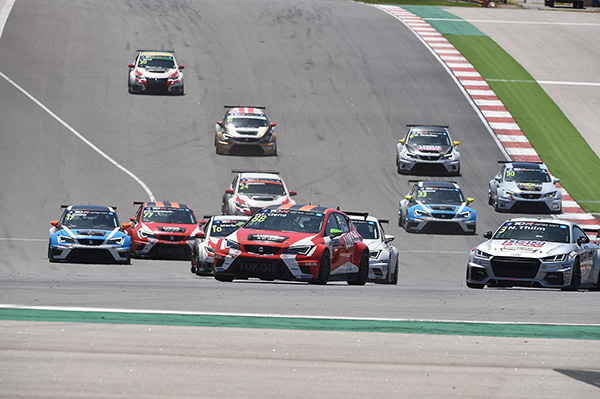 Race 1 – Thiim wins ahead of of Gene and Veglia

At his first visit to the TCR Nicki Thiim, the Audi Sport Customer racing driver, took the win in the Liqui Moly Team Engstler Audi TT on a warm afternoon in the Algarve. The Dane lead from pole to chequered flag and was four seconds ahead of Jordi Gené at the line in the Team Craft-Bamboo Lukoil SEAT León, with his team-mate Lorenzo Veglia third (this was the first podium result for the young Italian).
Thiim was the sixth different winner from seven rounds. Oscar Nogués scored the first points for Campos Racing with the Opel Astra OPC. The highest placed local driver was José Monroy, who finished eighth in his Veloso Motorsport SEAT León, while his team-mate Francisco Mora took the final point for tenth.
It was a positive result for championship leader, Stefano Comini in the Target Competition SEAT in fifth as the three drivers behind him in the points failed to score. One of them was Gianni Morbidelli who was involved in a lot of the action in his West Coast Racing Honda Civic and retired on lap eight after contact with Andrea Belicchi.
The race was action packed for the whole 13 laps with many exciting overtaking moves and quite a lot of contact.